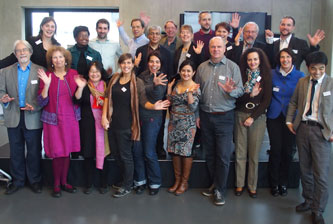 A new set of study materials on Families as Agents of Change: Collectively Advancing Efforts to Build a Just and Sustainable Society, prepared by Peter Adriance of the U.S. Baha'i Office of Public Affairs (and IEF board member), is now available on the IEF web site.
.

After drafting work by a group of leading academics, and wide circulation for consultation, an Islamic Declaration on Global Climate Change was adopted at an international Islamic Climate Change Symposium, held in Istanbul, Turkey, on 17-18 August 2015(1) (see ANNEX). The document is a significant addition to other religious declarations on this critical issue for the future of humanity, alongside those of the Bahá'í International Community's statement in 2008: Seizing the Opportunity: Redefining the Challenge of Climate Change (2) and the Pope's June 2015 encyclical Laudato Si': on care for our common home (3) reviewed on this web site (4), among others.