ALLIANCE OF RELIGIONS AND CONSERVATION

The Alliance of Religions and Conservation (ARC) (http://www.arcworld.org), in partnership with the United Nations Development Programme (UNDP) organized

MANY HEAVENS, ONE EARTH:
FAITH COMMITMENTS TO PROTECT THE LIVING PLANET

They invited the major religions and faith traditions to prepare long-term action plans of generational change for climate change and the environment. Thirty-one plans from nine faiths were launched at a celebration on 3 November 2009 at Windsor Castle, United Kingdom, hosted by HRH The Prince Philip, Duke of Edinburgh, and in the presence of the United Nations Secretary-General, Ban Ki-moon. You can watch a video interview of the Secretary-General here. 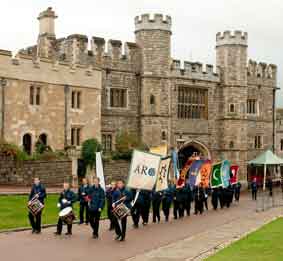 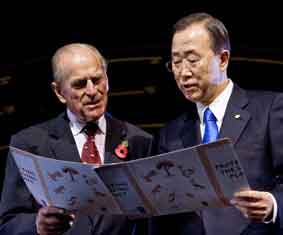 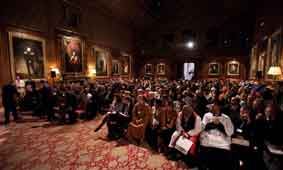 Each of the participating faith organizations received certificates of appreciation from Prince Philip and Ban Ki-moon. The Bahá'í International Community was represented by Tahirih Naylor and Arthur Dahl (President of the International Environment Forum). The celebration was preceded and followed by workshop sessions and artistic performances. Further information is on the event web site at http://www.windsor2009.org/. 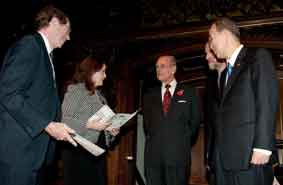 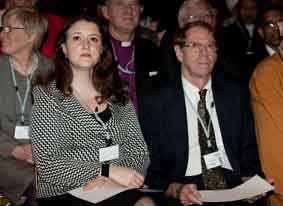 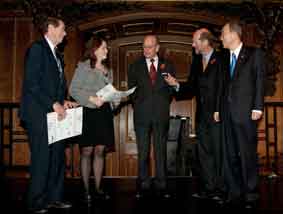 The following are brief summaries of the principal action plans. Click on the names for a pdf of the summary plans. Further details are available on the Windsor event and ARC web sites.

Seven Year Plan of Action on Climate Change. The Bahá'í action plan seeks to increase local communities' and individuals' awareness of the needs and their capacity to respond, in a grassroots process that encourages innovation and a variety of approaches to the environment appropriate to the rhythm of life in the community. It commits to develop a course in the Institute process to explore the relationship of humans to the environment as articulated in the Bahá'í Sacred Writings, in order to build the capacity of participants to engage in acts of service related to environmental sustainability. Similar materials will be developed for children and junior youth. The plan refers to the International Environment Forum web site as a source of information to draw upon in this process.

The Jade Buddha Temple, Shanghai, launched its Eight-Year Plan on Environmental Protection. The plan was developed in collaboration with all other Shanghai Buddhist monasteries and will be a model for Buddhists from all over China. It centres around Buddhism's teachings about simple living and cherishing your blessings. It promotes ecological thinking hidden within Buddhist teachings, education, greening the monasteries and reducing incense pollution, protecting rivers and wildlife, environmental funding and responsible investment, and working with government, local communities and the media.

Plans were prepared by the Armenian Apostolic Church, the Australian Catholic Bishop's Conference, the Autocephalous orthodox Church of Poland, the Church of England, the Church of Norway, the Church of South India, Catholic Bishops' Conference of England and Wales, Catholic Coalition on Climate Change (USA), Evangelical Lutheran Church of Tanzania Northern Diocese, Evangelical Presbyterian Church of Ghana, Franciscan family, the Greek Orthodox Patriarchate of Antioch and All the East, New Psalmist Baptist Church, Patriarchate of Alexandria and All Africa, Presbyterian Church in Cameroon, Quakers in Britain, ROAR (Religious Organizations Along the River - USA), Society of Jesus (Jesuits), and Vineyard Churches (USA).

Many of these plans include greening church properties, reducing carbon footprints, educational activities, an emphasis on simpler lifestyles, and developing green theology and eco-spirituality.

The China Daoist Association approved an Eight Year Plan for Environmental Protection as a long-term environmental strategy for all Daoist temples in mainland China. Daoists believe that humanity should obey nature's rules, maintain the balance of our ecological systems and protect the species that live beside us. The plan includes sections on education, resources, ecological wisdom and creating ecological partnerships and celebrations.

The Hindu nine-year plan for environmental protection and education was prepared by the Hindu community in the UK for the worldwide Hindu community. Named the Bhuma (Mother Earth) Project, it includes categories of education, action and networking, such as a Hindu labelling scheme for products and services, promotion of a non-violent (ahimsa) lifestyle to reduce impact on the Earth, and making Hindu temples and celebrations energy efficient and environmentally friendly.

The Muslim Seven Year Action Plan on Climate Change 2010-2017 was endorsed by 50 religious scholars from across the Muslim world at a meeting in Istanbul in July 2009. It establishes Muslim Associations for Climate Change Action (MACCA) representing different Islamic countries and Muslim communities of the world. Elements of the plan include an Islamic environmental labelling system, work towards a 'Green Hajj' (pilgrimage), construction of a 'green mosque' to showcase best environmental practice, developing two or three Muslim cities as 'green cities', a focus on education on the environment, a best practice environmental guide for businesses, and a special TV channel for Islam and the environment.

The Jewish Climate Change Campaign focuses on living more lightly on the planet. It was developed by Hazon, working in association with the Jewish Climate Initiative in Israel and a wide number of Jewish organizations and leaders in the US, Israel and the UK. Its vision is a Jewish community living healthily and sustainably by September 2015, the end of the next shmita (sabbatical) year, led by 'green teams', with efforts in education, action and advocacy at the individual/family, institution and wider community levels. Specific targets are for Israel to become the first nation predominantly powered by renewable energy, to recover the ecological value of Shabbat and the festivals, to green Jerusalem as a model sustainable city, to cut communal meat intake by half and reduce energy consumption, and to integrate environmental education into all Israeli, Jewish and Hebrew schools.

For Shintos, the creation protects them, with forests and not buildings as the true shrines of Shintoism. The plan calls for a new Religious Forestry Standard that is religiously compatible, environmentally appropriate, socially beneficial, and economically viable. All the forest-owning faiths are invited to prepare these standards before a meeting in Ise, Japan, in May 2014.

The Eco-Sikh Five Year Plan was endorsed by 250 Sikh leaders in Delhi in July 2009. It articulates a Sikh eco-theology and focuses on five key areas: assets, education, media/advocacy, eco-twinning and celebration, with an elected steering committee and a new web site dedicated to the environment: http://www.ecosikh.org, where each community can share its customized plan.

The US-based interfaith environmental coalition GreenFaith prepared a Seven Year Plan for Environmental Leadership built on its core values of Spirit, Stewewardship and Justice. This includes distance education for ordained leaders, reflection on spiritual experience in nature, educational curricula based on The Story of Stuff video, resources on sustainable consumption and energy conservation, and training in environmental justice issues. There is also an emphasis on networking and partnerships both in the US and internationally.

Operation Noah, an ecumenical faith-based climate change body in the UK, wants to initiate 'zero carbon' armies of young people committed to de-carbonising activities, as well as group study and contemplation, communicating the relevance of the Christian faith to global warming, and challenging structural injustice.

The Regeneration Project in the US seeks to deepen the relationship between ecology and faith through the Interfaith Power and Light Campaign which responds to global warming through the promotion of energy conservation, energy efficiency, and renewable energy.

Other religious traditions committed to complete action plans by November 2010 are Cambodian Buddhism, Mongolian Buddhism, the Maronite Church in Lebanon, the Russian Orthodox Church, and the Scottish Conference of Catholic Bishops.