The most basic level of a system is the rules by which it is organized and operates. In human systems and communities, effective individuals and institutions function through values and spiritual capital, accounted for indirectly through performance measures.

While spirituality is often viewed as the last and least important human attribute to define the human hierarchy of needs (Maslow), SCT argues that since all form of capital are fundamentally conceptual (i.e., their value resides in human understanding rather than something objectively outside it) spirituality and spiritual worldviews are capable and necessary to shift individual and societal perspectives on the real and perceived value of other forms of capital. In this sense one might argue that spiritual capital belongs at the bottom of the value pyramid rather than its pinnacle.

Beyond the philosophical implications in the context of rethinking a Global Accounting System, SCT provides an expanded capital framework for human well-being which explicitly goes beyond materialistic conceptions, and hence provides a more sustainable and balanced alternative perspective of human prosperity.

Link to the section of the background paper 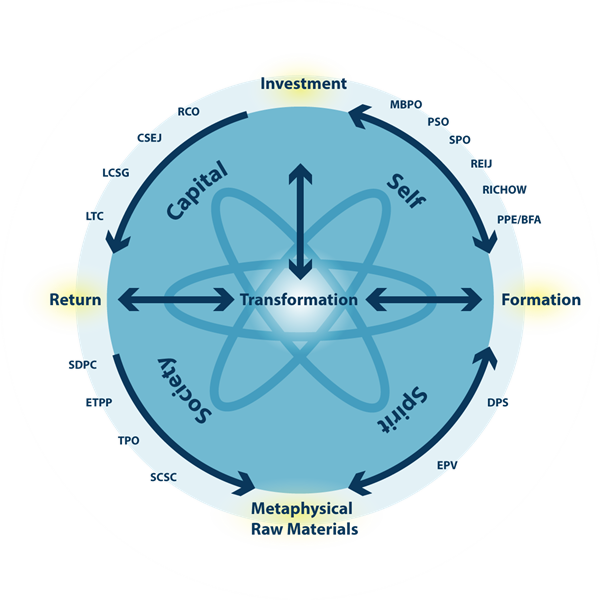 Each core idea breaks out into a series of sub-elements. The metaphysical raw materials proposition consists of:
1.1) embedded personal values (EPV) and
1.2) deep personal spirituality (DPS)

Embedded personal values are the values individuals have or acquire from their personal life context, their experience, and others they interact with. Deep personal spirituality refers to the spirituality which every single human being inherently possesses, but which has been more highly developed in certain individuals than in others.

The spiritual capital formation proposition consists of six elements:
2.1) A prevailing personal experience that leads to a bias for action (PPE/BFA);
2.2) Recognition of the ontological, interconnected nature of the world (RICHOW);
2.3) Recognition and conviction of social and economic injustice in the world (REIJ);
2.4) A sense of personal responsibility toward the other (SPO);
2.5) Willingness to stand in solidarity with the other and (PSO);
2.6) A powerful motivation to personal action by the unjust plight of the other (MBPO).

“The common element in each of these six formation properties is the growing recognition of the role of human relationally and social ontology in economics” (Rima 2013a, p. 180).

Spiritual capital investment breaks down into four specific actions which combined increase individual and social spiritual capital. These are:
3.1) becoming relationally connected to the marginalized and suffering (RCO)
3.2) making a commitment to social and economic justice activities (CSEJ)
3.3) leveraging other forms of capital (human, social, financial etc.) for social and economic good rather than for personal desire and greed (LCSG)
3.4) making long-term commitments to the practice of leveraging one’s other forms of capital (LTC)

Human life is first and foremost understood to be spiritual in purpose and nature. Human behavior is informed by spiritual values and virtues such as integrity, honesty, humility, selflessness and courage. Societies are characterized by a state of justice, equality, prosperity, dignity, and safety, among others.

Spiritual Capital (SC) is the accumulated and enduring collection of beliefs, values and dispositions that drive social, organizational and individual behavior.

Every individual is born into an existing community or society which will “socialize” the individual with its beliefs, values and dispositions. This is an important way in which spiritual capital multiplies and gets transmitted. Each individual at the same time is an “agent”, capable of investigating his or her own reality, making moral choices and adapting their behavior in conformity or disconformity with the collective. Hence societal reality and social change are always an interplay between group and individual dynamics. Social change therefore must address both at the same time in order to evolve.

There are fundamentally three different ways of looking at Spiritual Capital which overlap, inform each other and create some conceptual tensions.

Spiritual capital viewed as a “collective phenomenon”; here spiritual capital resides in societal “structures” such a culture, religion and institutions (i.e. church). Since all humans are born into a particular structure, the dominant influence of this type of spiritual capital is top down, it generally seeks conformity and hence can be seen as “limiting”, “constraining”, “predetermining”. Yet it is also enabling as it allows people to “navigate” their reality within the “rules” of each structure. For most individuals this manifestation of spiritual capital operates as a subconscious or semi-conscious level, though there are individuals who are highly aware of their communal spiritual capital and hence are better able to “capitalize” on it.

Spiritual capital as an “individualistic” phenomenon; relates to traits and qualities that manifest at the individual level, and express as personal virtues, values and character. This form of spiritual capital “emanates” from within the individual (rational) soul and intellect. This conception emphasizes “distinctiveness” over “collectiveness” seeking to understand each unique human spiritual and moral journey and what it may contribute to the collective.

In addition to exploring on a deeper level the contributions of these three “lenses” on spiritual capital, each perspective plays a role in identifying and potentially mobilizing untapped forms of capital to first reimagine then begin to individually and collectively enact a society capable of shifting our current material civilization into more sustainable and perhaps spiritual directions.

Current state of the art

Present Spiritual Capital as a science-based, dogma transcended “meta-concept” which acts as neutral language and engages a broad range of definitions and understanding of spirituality / religiosity and which seeks their application in various fields relevant to individual, organizational and social flourishing.

Co-create a new and inclusive understanding of (applied) human spirituality that imbues an old concept with new, future-oriented meaning.

Serve as a transdisciplinary platform for the exchange of ideas and understandings of spirituality as a motivating “force for good”.

Build a single yet diverse community of believers, seekers, doubters and those who critique in a united effort to understand reality.

Provide religious leaders, policy makers, business people and others working to make our societies a better place with meaningful, understandable and applicable knowledge around spirituality and its value in society.

Building a global database of Spiritual Capital researcher and practitioners that can assist policy makers, business leaders, spiritual leaders etc. translate the idea of spiritual capital into tangible actions for the common good.

Launch of the Spiritual Capital and Moral Leadership Institute, an organization that aims to implement realize above mentioned strategies.

Coe, Roger. 1993. An Organic Order: An Approach to the Philosophy of Baha'u'llah through the Writings of Shoghi Effendi. in The Vision of Shoghi Effendi Ottawa: Association for Bahá'í Studies North America, 1993. https://bahai-library.com/coe_organic_order

Leading Beyond the Ego https://www.leadershapeglobal.com/lbte