Rural Social Action on Agriculture and Food in Uganda

The following example of the transformative power of the Bahá'í teachings on agriculture and food as applied in rural Uganda was prepared by Masaidio Kalenga* during a Wilmette Institute course on Bahá'í perspectives on Agriculture and Food in March 2022, and is shared here with his permission. May it inspire many others to follow his example.

My involvement in social action began way back in 2007 and my love for agriculture increased when I started visiting villages in Eastern Uganda and getting first-hand experience of the conditions of the farmers. I recall an encounter with a family that had a girl whom we wanted to enrol as a participant in one of the programs offered by a Baha’i inspired organizations in Uganda. Upon hearing that agriculture is one of the lines of action that the organization focuses on and helps their participants to get engaged in, the mother of the girl refused to let her join the program. Agriculture, according to her, was not something she would wish her daughter to pursue as a vocation. The disappointment in the face of this mother is so common among farmers in many parts of Uganda. My experience living in the rural community had convinced me that agriculture plays a key role in the life of humanity but I could not comprehend why a farmer is still neglected by those she feeds.

I wanted to understand what the Baha’i faith says about agriculture so that I could start using the Words of the Central Figures of the Faith as I continued participating in the process of expansion and consolidation, social action, and prevalent discourses of society. My belief in the creative power of the Words of the Central Figures was an assurance that it would attract the hearts of those who crossed my path. Before joining the Wilmette Institute course, I had once read the story of the Master and how His extraordinary accompaniment of the friends in Adassiyyah brought to light what it means for spiritual and material development to go hand in hand.

I did not have any knowledge about the Wilmette Institute until one day when I read on one of its faculty's facebook page about a course on Baha’i Perspectives on Agriculture and Food that was soon to start and the Institute was inviting those interested to apply. That’s exactly what I wanted; a course that could help me understand more about what the Baha’i faith says about agriculture.

On day one of the course, I wondered why most of the participants that had enrolled in this course were senior citizens. Could it reaffirm the experience I had with that mother in the rural village of Uganda that agriculture is not something that parents would want their children to pursue as a career? Anyway, I ignored that and put my focus on reading all the assignments the faculty posted.

Study, action, and reflections on action are three important elements that I learned when I was first introduced to Fundaec’s curriculum of Preparation for Social Action program way back in 2007. If I wanted to gain more from this course, I thought, I must make sure that I translate these concepts into action and come back to reflect on my actions. Thus, when we completed unit 3 of the course “Baha’i Perspectives on Agriculture and Food”, I decided to organize a space to share with my colleagues who are also involved in social action some of the insights I had so far gained from the readings and interactions with the faculty and course mates. Below are some highlights of how the insights from the course are impacting those who come into contact with the Holy Writings.

1. Study of the Baha’i Writings on Agriculture

Drawing from the Writings of the Faith to understand the special place that agriculture occupies in the life of humanity has power to transform the hearts of many who would otherwise think that it is an activity that should only be carried out by the uneducated or rural people or the elderly folks. 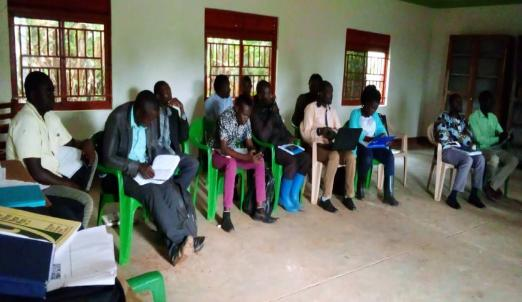 For 3 days, 16 participants came together to study and reflect on Baha’i Perspectives on Agriculture and Food and thereafter took some actions to apply what they had learned. They were helped to understand what the Central Figures of the Faith not only said about a farmer as being a “primary factor in the body politic” but also the actions they took to practically demonstrate how agriculture “precedeth all the other principles” for the administration of the affairs of men.

Some themes were explored including agriculture and world peace, the farmer and community, responsibility of Baha’i institutions, and individual pursuit of agriculture. Each theme had a wealth of quotations from the Holy Writings which were explored in depth and experiences shared based on the reality of the friends in their communities.

At the end of the day, it was clear that the participants’ language had changed and they could be heard quoting directly from the Writings about agriculture and the special regard it must be accorded.

The participants in this space had identified 63 families from two villages to engage in conversations about agriculture. The insights gained from the study of the Writings on agriculture assisted them to have meaningful conversations with each family that they visited on day 3 of the training.

Before going out to visit these families, participants reflected on a range of questions including their role in accompanying the families, goals and objectives, skills and capacity they are helping the families to develop, how to ensure that the community members are seeing the benefits of participating in these activities, how and when to start involving these families in the core activities of the Faith.

In addition, the friends reflected on the content of their conversations. A simple exercise was carried out to understand the kind of information someone would like to know about his or her friend. A list of questions was generated which assisted the participants to have an idea of what to include in their conversation. 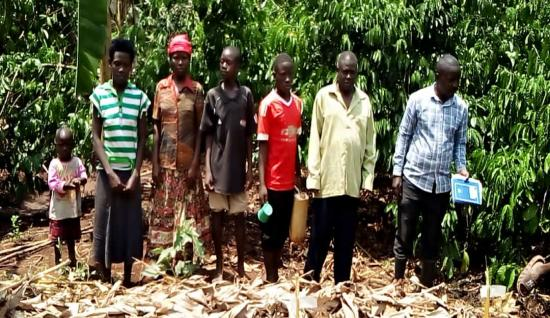 The excitement on the faces of the participants after visiting 20 families was an indication that the home visits were a success. After the training, one participant wrote: “Indeed all the families are so happy and excited about their involvement in Backyard Garden activities and slowly by slowly the communities of Bukutira East and West have started showing glimmerings of collective transformation…” We spent about an hour reflecting on each group’s experience with the families. It was evident that the families wanted this kind of collaboration to continue. Families shared their own experiences with farming and the challenges around them. For instance, lack of seeds was one of the challenges that most families mentioned. Joseph, for example, took the group that visited him to the garden that he had prepared as a result of the conversations initiated by the participant accompanying his family but he had not planted because of lack of seeds. He was excited to hear that the participants are planning to establish a seed bank where the community members will be borrowing seeds and paying a small interest instead of buying seeds which many farmers cannot afford and sometimes are expired.

3. Introducing Agriculture in a Study Circle

Another participant who attended our training decided to introduce the idea of growing crops in her study circle. The group has 13 young mothers who are being helped to go through the institute process with the aim that they will become children’s class teachers and junior youth animators. Most of these young mothers stay at home. One way to strengthen the group, the participant thought, was to introduce the idea of helping each young mother to establish a backyard garden of vegetables. In collaboration with a Baha’i inspired organization, the tutor of the study circle placed an order for seedlings and all the ladies are waiting for them to be ready for transplanting.

A group of young mothers studying Book 1 in Wanyange Village

4. Participants’ Notes on Baha’i Perspectives on Agriculture and Food

Below are a few selected notes from the participants’ notebooks after our study:

“If agriculture is introduced in the institute process and core activities, that means all the family members are going to become producers. For example, imagine if a child participating in a children’s class is encouraged to have his or her own garden which he or she will be learning from and the same happens to the junior youth at home and also the family heads, you see that the family will have a lot of food which will even be beyond their consumption. Therefore, the institute process and the core activities have to incorporate agriculture in their community building process.”

Agriculture is the backbone of everything in this world that is why among the five principles of Baha’i faith we are told to give special regard to Agriculture. Therefore, in order to follow the other four principles, one must have what to eat “A hungry man is an Angry man” with this quotation in mind, we see that the principles of the Baha’i faith can enhance the role of families in farming.

Yes, I see the role of the institute process and core activities in the transformation of food systems at the community level. When we try to study some teaching and guidance’s, of the central figures of the faith we also see that they were more so apparent in encouraging friends or believers to participate in the agricultural activities. In my community this system should also be encouraged by the local spiritual assemblies to create awareness to the people at the grass root and also assist them in carrying out certain tasks that need help and also tell the friends as why they should get engaged in this field.

* Masaidio Kalenga is originally from the Democratic Republic of Congo but has lived in Uganda since 1998. Although he holds Computer Science and MBA degrees, he decided to focus more on agriculture and food production on small farms. His love for agriculture started taking shape when he was given the opportunity to serve with a Baha'i-inspired organization implementing the Preparation for Social Action program in Uganda (FUNDAEC curriculum). The organization invited him a couple of years ago to coordinate its agriculture line of action when its agriculture resource person had to leave the country. Seeing families growing their own food and sharing with their neighbours the harvests always brings joy to his heart!