The environmental crisis and our lack of spirituality

What is the relationship between environment and spirituality?

The All-Knowing Physician hath His finger on the pulse of mankind. He perceiveth the disease, and prescribeth, in His unerring wisdom, the remedy. Every age hath its own problem, and every soul its particular aspiration. The remedy the world needeth in its present-day afflictions can never be the same as that which a subsequent age may require. Be anxiously concerned with the needs of the age ye live in, and center your deliberations on its exigencies and requirements.
(Bahá'u'lláh, Gleanings from the Writings of Bahá'u'lláh, 106)

Population growth 9 billion in 2050, 11 billion in 2100, or peak and ageing decline?
20% of population consumes 80% of resources; half the population can hardly make ends meet
Energy challenge and the climate crisis
Increasing water shortages
Loss of biodiversity and ecosystem services
Soil degradation; risks to food security
Extremes of wealth and poverty accelerating
Risk of financial collapse

What caused the environmental crisis?

Early in the twentieth century, a materialistic interpretation of reality had consolidated itself so completely as to become the dominant world faith insofar as the direction of society was concerned.
(Universal House of Justice, One Common Faith, p. 3-4)

Having penetrated and captured all significant centres of power and information at the global level, dogmatic materialism ensured that no competing voices would retain the ability to challenge projects of world wide economic exploitation.
(Universal House of Justice, One Common Faith, p. 5)

Materialism, rooted in the West, has now spread to every corner of the planet, breeding, in the name of a strong global economy and human welfare, a culture of consumerism. It skilfully and ingeniously promotes a habit of consumption that seeks to satisfy the basest and most selfish desires, while encouraging the expenditure of wealth so as to prolong and exacerbate social conflict. One result is a deepening confusion on the part of young people everywhere, a sense of hopelessness in the ranks of those who would drive progress, and the emergence of a myriad social maladies.
Universal House of Justice, 2 April 2010

Consumer culture, today's inheritor by default of materialism's gospel of human betterment, is unembarrassed by the ephemeral nature of the goals that inspire it.

Emboldened by the breakdown of traditional morality, the advance of the new creed is essentially no more than the triumph of animal impulse, as instinctive and blind as appetite…
(Universal House of Justice, One Common Faith, p. 10)

Our society of abundance

The most significant impact on the environment and sustainability comes from the wealthy and our society of abundance. Our materialistic consumption is not compensated by advances in technology. The only way we can avoid the climate and biodiversity catastrophes is through a significant reduction in our lifestyle and GDP in Western economies, with all the losses in employment and changes in our economic model that this implies. We must rethink our communities from the bottom up and simplify our ways of living.
(based on Thomas Wiedmann 2020) 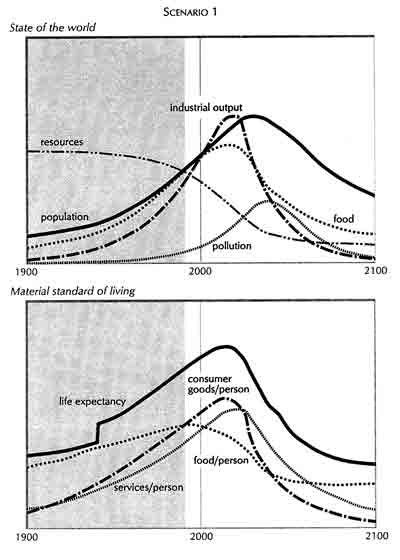 Scenario 1995, transition to sustainability after the Rio Earth Summit of 1992 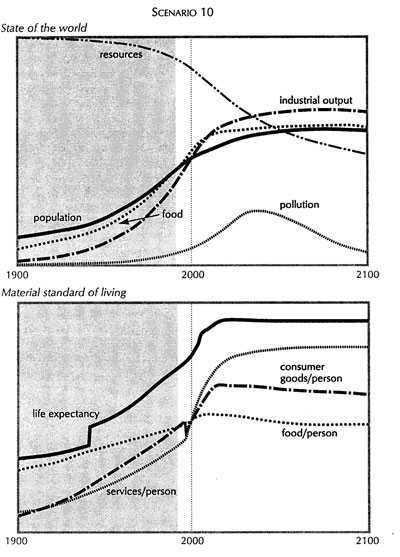 Scenario 2015, transition to sustainability only in 2012 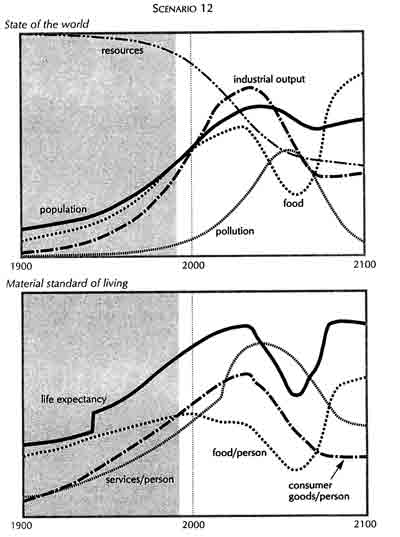 Where are we now? On track 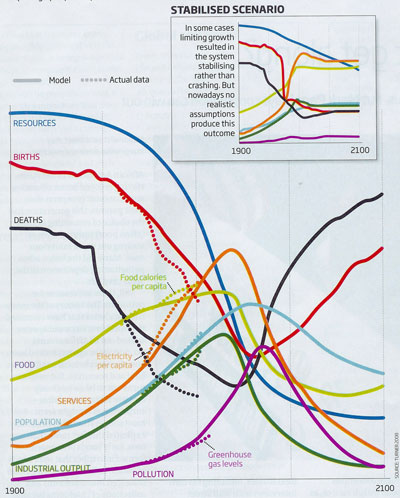 The transition to sustainability without a crisis is no longer a realistic possibility
MacKenzie, Debora. 2012 Doomsday Book. New Scientist, 7 January 2012, pp. 38-41.

The civilization, so often vaunted by the learned exponents of arts and sciences, will, if allowed to overleap the bounds of moderation, bring great evil upon men.... The day is approaching when its flame will devour the cities...
Bahá'u'lláh (1817-1892)

The process of disintegration must inexorably continue, and its corrosive influence must penetrate deeper and deeper into the very core of a crumbling age. Much suffering will still be required ere the contending nations, creeds, classes and races of mankind are fused in the crucible of universal affliction, and are forged by the fires of a fierce ordeal into one organic commonwealth, one vast, unified, and harmoniously functioning system.
Shoghi Effendi 1936, The World Order of Bahá'u'lláh

Adversities unimaginably appalling, undreamed of crises and upheavals, war, famine, and pestilence, might well combine to engrave in the soul of an unheeding generation those truths and principles which it has disdained to recognize and follow. A paralysis more painful than any it has yet experienced must creep over and further afflict the fabric of a broken society ere it can be rebuilt and regenerated.
Shoghi Effendi 1936, The World Order of Bahá'u'lláh

The promised crises are here 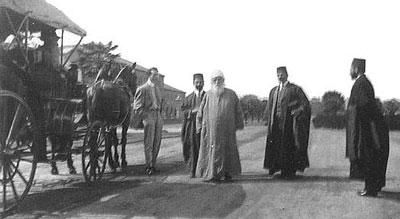 In His talk on science and religion at Stanford University in California in 1912, 'Abdu'l-Bahá said: The elements and lower organisms are synchronized in the great plan of life. Shall man, infinitely above them in degree, be antagonistic and a destroyer of that perfection?
('Abdu'l-Bahá, talk at Leland Stanford Junior University, Palo Alto, California, 8 October 1912. Promulgation of Universal Peace. Wilmette, Bahá'í Publishing Trust, 1982. p. 350)

In a day such as this, when the tempests of trials and tribulations have encompassed the world, and fear and trembling have agitated the planet, ye must rise above the horizon of firmness and steadfastness with illumined faces and radiant brows in such wise that, God willing, the gloom of fear and consternation may be entirely obliterated, and the light of assurance may dawn above the manifest horizon and shine resplendently.
(‘Abdu’l-Bahá)

The world stands more and more in need of the hope and the strength of spirit that faith imparts.
Universal House of Justice, Naw-Ruz 177 (20 March 2020)

While we cannot say now where all that will lead, it is clear that the world will never be the same.

This is our chance to fix what is wrong in our societies and in our relationship to the environment.