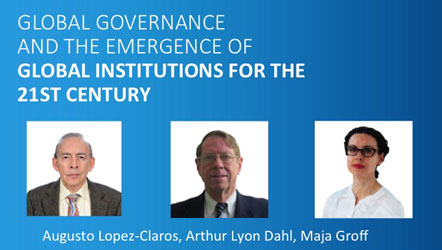 The original members of the group are
- Augusto Lopez-Claros, Senior Fellow, School of Foreign Service, Georgetown University, and World Bank, Bolivia/USA
- Arthur Lyon Dahl, President, International Environment Forum and retired senior official of UN Environment, Switzerland
- Maja Groff, international lawyer based in The Hague, Canada/Netherlands
winners of the New Shape Prize for this project in May 2018.

Our first product will be a book now in press (400 pages) to be published in January 2020 by Cambridge University Press.

Diagram of proposed revisions to the United Nations and the UN Charter: 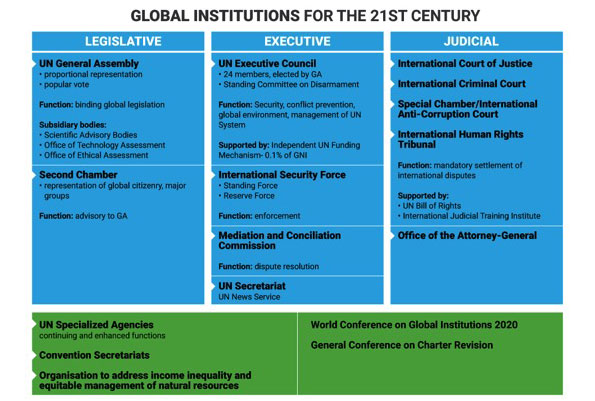 Consultation with the Global Challenges Foundation on follow-up activities in Stockholm, 7-8 October 2019.

Presentation to an external review panel of the Global Challenges Foundation in Stockholm on 15 February 2019.

Joint meeting with the Common Home of Humanity working group in Porto, Portugal, on 31 January-4 February 2019.

On 5 November 2018, the Baha'i International Community in New York hosted an event "Global Governance in an Age of Transition: The Current and Future Role of the United Nations" featuring our proposal (see the separate report).

The working group presented its proposals at the Paris Peace Forum on 11-13 November 2018, to the All Party Parliamentary Group on the Baha'is, meeting in the Churchill Room of the Houses of Parliament at Westminster, U.K., on 14 November, to a meeting of Chief Justices in New Delhi, at the Center for Strategic and International Studies, Washington, D.C., on 10 December, and in some other fora.

On 15 February 2019 in Stockholm, the working group defended selected modules based on its proposals before a panel of expert outside reviewers convened by the Global Challenges Foundation.

The Global Challenges Foundation (https://globalchallenges.org/en) was founded in 2012 by Swedish financial analyst and author Laszlo Szombatfalvy, with the aim to contribute to reducing the main global problems and risks that threaten humanity.

The Foundation is particularly concerned about a number of risks that could threaten the existence of at least a tenth of the Earth’s population, referred to as global catastrophic risks. These include climate change, other large-scale environmental damage, politically motivated violence, extreme poverty and population growth. These five main challenges are interdependent and influence each other detrimentally, requiring immediate joint action by the world’s states. As these risks include the greatest threats to humanity, they should be on top of the international political agenda in order to ensure safety for existing and future generations.

Quarterly Report of the Global Challenges Foundation November 2018, "From Idea to Prototype" includes an update on our work.

In November 2016, the Global Challenges Foundation (GCF) launched a global prize competition, “The Global Challenges Prize 2017: A New Shape”, which challenged thinkers all over the world to formulate proposals for new models of how the major global risks could be managed more effectively and equitably to avoid an extreme global catastrophe in coming decades. The New Shape Prize was the biggest competition of its kind, seeking improved frameworks of global governance of global catastrophic risks. During the time it was open for submissions from November 2016 to September 2017, it received 2,702 entries from 122 countries.

Our proposal "Global Governance and the Emergence of Global Institutions for the 21st Century" by Augusto Lopez-Claros, Arthur Lyon Dahl and Maja P.C.E. Groff, was the first of three winners of the New Shape Prize awarded on 30 May 2018. 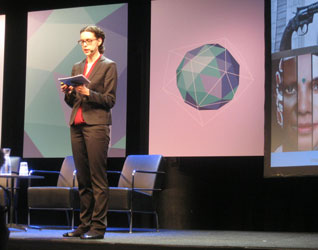 The summary of our proposal as a finalist is at Global Governance and the Emergence of Global Institutions for the 21st Century,
and you can see the Full Proposal as submitted to the GCF. Maja's presentation at the New Shape Forum: https://youtu.be/YM6dN-u3Xws.