Intergenerational Perspectives on Visions for the Future 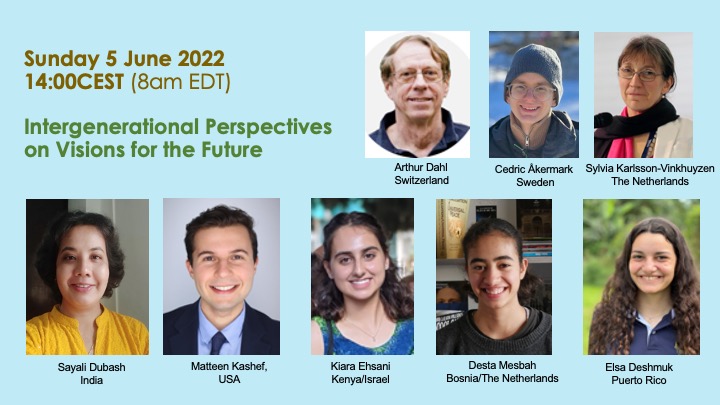 Intergenerational Perspectives on Visions for the Future

This panel brings together a participant from the original 1972 Conference reflecting on his aspirations at that time and what we have learned since, alongside youth expressing their hopes and vision for the future and articulating their ongoing efforts to lay a foundation for that future locally and globally.

As a young environmental activist and researcher at the 1972 Stockholm Conference, Arthur Dahl set off on a life of service through an international career working from the village to the intergovernmental levels, building the Secretariat of the Pacific Regional Environment Programme, as a senior UNEP official, helping to write Agenda 21 and developing indicators of sustainable development, coordinating the UN System-wide Earthwatch, and now trying to improve international governance. There are lessons that may inspire the youth of today to have the courage of their convictions to work for the better world that is possible. Arthur Dahl is president of the International Environment Forum, who represented the Bahá'í International Community at the UN Conference on the Human Environment in 1972. After many years in the Pacific Islands and with UNEP in Kenya, he is now living in Geneva, Switzerland.

Desta Mesbah, at 19 years old, is pursuing a bachelor's degree in Global Sustainability Science at Utrecht University. Desta grew up in Sarajevo, Bosnia-Herzegovina and was fortunate enough to have teachers at school who utilized the surrounding natural area as a learning environment. This experience made a great impact on Desta’s perspective on nature.

When growing up in Kenya, Kiara Ehsani was able to witness so much beautiful and wild nature such as the thick diverse forests, free open grasslands, mountainous regions, long stretching beaches and colorful coral reefs. However, she noticed a subtle but plausible transformation occurring gradually as she grew up with more and more garbage “popping up” everywhere. Kiara Ehsani is now 19 and about to start university in Canada to study natural resource conservation. For the last year she has been volunteering at the Baha’i World Centre which has helped her gain much insight into how to better serve humanity for the rest of her life - specifically through environmental work.

Matteen Kashef is entering dental school at University of Florida, in Gainesville, Florida. He has recently completed his bachelor's degree in Nutritional Sciences, with a minor in Health Disparities in Society. As he moves forward further into the healthcare setting, he has become more cognizant of the waste that is accumulated. Why is it that there is so much dental waste? What are some ways to reorient our mindset and be more environmentally conscious? And further, what can inspire this new approach to reducing waste and being more sensible for our next generation of healthcare professionals?

Sayali Dubash is a Program and Curriculum Development Coordinator at the Baha'i Academy in Panchgani, India, working in the field of value education and research. Her main tasks include handling different aspects of the Academy's work. This includes curriculum design and development and content creation. She conducts workshops and online courses for P.G and U.G students as they create educational materials. She is also involved in value education research. Sayali would like to encourage others to be the change and take initiatives for personal and social transformation.

Elsa Deshmuk is a high school student in Puerto Rico, having moved there in 2017 a few days before Hurricane Maria hit. She has experienced first-hand the resilience of the people and the spirit of community that arose from the challenges related to the storm. Prior to that she lived in China, which helped her to expand her perspective and be less influenced by nationalistic prejudices. As a result of these experiences, she sees the beauty in all cultures.

Sylvia Karlsson-Vinkhuyzen is an Associate Professor with the Public Administration and Policy Group of Wageningen University. She strives to give students opportunities to understand the actors, mechanisms and processes of global governance for the environment and to reflect on what role they could have in such processes. She grew up loving nature and studied biology first and then later moved her focus to trying to understand humanity. She struggles to create a more harmonious relationship with nature than what has been shown in the past century in many parts of the world. Since 2016 she has served with an international panel of experts (IPBES) which attempts to develop positive visions of the human/nature relationship and how it can develop those visions and bring them to fruition. She loves being in nature, especially the vast pine forest of Northern Europe, and growing vegetables and berries in her garden.

Cedric Åkermark, who is 24, majored in biology at Stockholm University, which earned him a Bachelor of Science degree. He plans to enter the Masters' program in Ecology. Growing up in Sweden he has always loved everything that had to do with nature and the creatures that existed in it. He witnessed the forest where he lived cut down for the production of forestry products. That made him reflect on how society needs to find a balance between getting utility from nature and preserving it for the future, and live more in harmony with nature.