It is the time for us to send a strong unified message to our leaders on the critical need to #makeUN75count and a loud reminder that #multilateralismmatters more than ever.

One special event on the International Day of Multilateralism is the event organized by the Global Challenges Foundation including a high-level book launch of Global Governance and the Emergence of Global Institutions for the 21st Century of which IEF members Maja Groff and Arthur Dahl were co-authors. It is being webcast on 24 April from 13:00 to 14:30 CEST at https://globalchallenges.org/events/the-future-we-want-the-un-we-need/

23 April - Today we are highlighting one of the most pressing global issues of the century: ‘Climate Change’. Working toward a robust climate governance regime takes time which, unfortunately, we do not have. The General Agreement on Tariffs and Trade, for instance, bore its first real fruits close to twenty years after their creation (during the Kennedy round in 1964). Realizing that we do not have twenty years ahead of us, we must start developing and testing the right frameworks now to further climate governance enforcement. We further suggest to make UN75 count by prioritizing the implementation of the Sustainable Development Goals (SDGs).

In light of the upcoming UN 75th anniversary and COP 26 how can today’s “hybrid” (top-down/bottom-up) climate governance model be further innovated and strengthened? Check the recommendations from the global policy dialogue on climate governance: https://www.stimson.org/2019/global-policy-dialogue-on-climate-governan…. Without swift and concrete action to mitigate the climate crisis, impacts including extreme weather, food shortages and displacement will only get worse. @TogetherFirst's campaign hub has gathered proposals that can be implemented during #UN75 - read them here: https://together1st.org/. The UN turns 75 years old, but this is no time for business as usual. Instead, vital UN organs like the Security Council need to adapt and implement forward-looking initiatives to address climate change and other security issues defining our time. 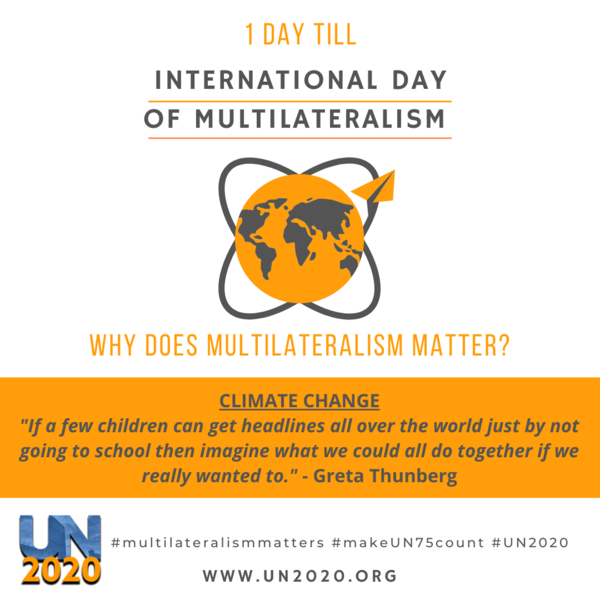 During #UN75, we need to emphasize the importance of stronger political leadership and transformative action to achieve the SDGs and the Paris Agreement by 2030. We need to #MakeUN75Count by enhancing the mandates of the bodies established to oversee SDG implementation, like the High Level Political Forum. 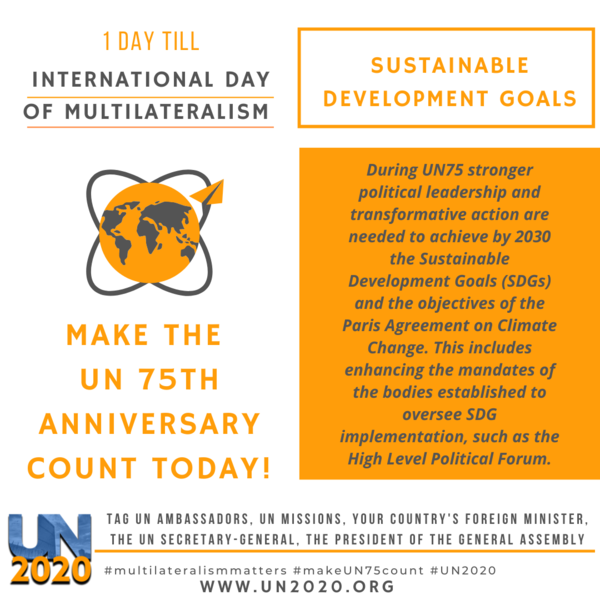 22 April, EARTH DAY - Today is the 50th Anniversary of Earth Day, the first mass event of the environmental movement (see separate IEF post). For UN2020, the priority today is peace and security. The Peacebuilding Commission should be upgraded into a Council. Moving “soft security” issues to front and center of the Peacebuilding Council’s agenda, instead of behind hard security issues prioritized by the Security Council at the expense of the former, allows for better accountability in governance. Lethal Autonomous Weapons (LAWS) pose a significant threat to our human rights. We need to mitigate the threat from such new and emerging technologies during UN75. This is also a chance for Member States to rally behind a more people-centered approach to security in a world without nuclear weapons. It’s time to eliminate this existential threat to all of humanity. 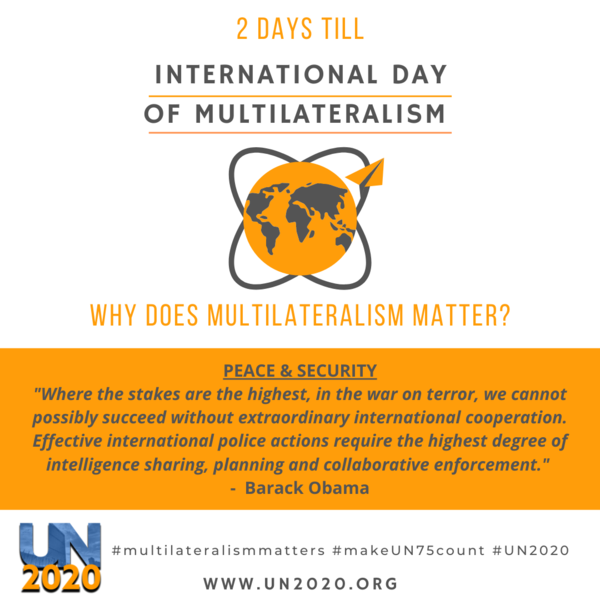 Humanitarian organizations – both inside and outside the UN system – are chronically underfunded. To #MAKEUN75COUNT also means to implement financing reforms to ensure that humanitarian aid is delivered as effectively as possible. The Secretary-General’s “Sustaining Peace Agenda” to strengthen the UN’s capacities to maintain peace & security empowers long neglected & under-funded aspects of the UN - like conflict prevention and mediation. 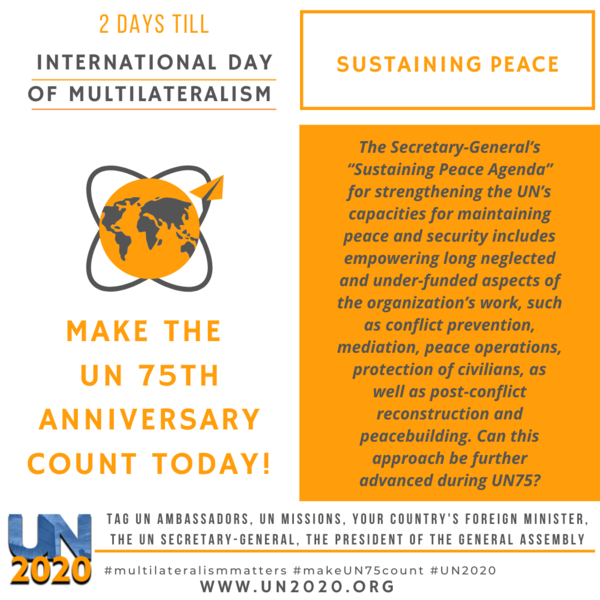 21 April - The issues for review today are the global issue of migration in answer to why #multilateralismmatters, and a stronger voice for civil society and vulnerable or marginalized groups. Thanks to the Global Compact for Migration, states have an agreed framework to "ensure safe, orderly and regular migration for the benefit of all". For advancing a human-rights based approach to migration, we need to strengthen multilateralism during UN75. 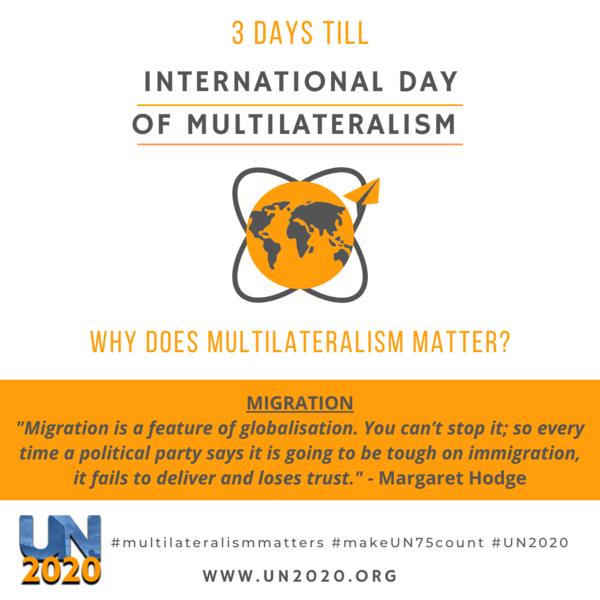 We are also advocating for a ‘People Centered UN’ and within that are civil society, youth, persons with disabilities and other vulnerable group voices. Despite the unquestionable value of civil society, the space made available to civic actors continues to shrink in countries around the world and at the UN itself. Strengthening the voices of citizen representatives in its various meetings and forums would make the UN more responsive and better able to address global issues. Consistently applied rules and procedures are required for meaningful civil society participation at all levels at the UN. The UN75 People’s Declaration and Plan of Action identifies several strategies for pursuing this goal to ensure civil society’s meaningful participation in global governance. 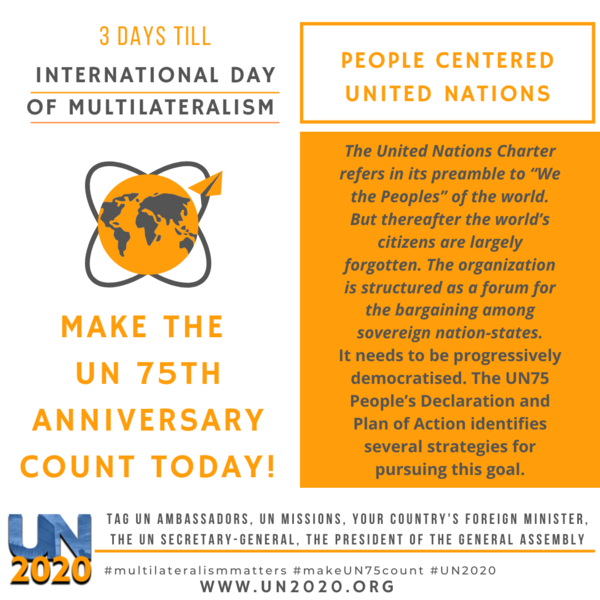 20 April - Today, the issue raised on why #multilateralismmatters is the ‘Rise of Nationalism’. During UN75, decision-makers need to address the UN’s democracy and legitimacy deficits by establishing a World Parliamentary Assembly as an advisory body to the UN General Assembly. 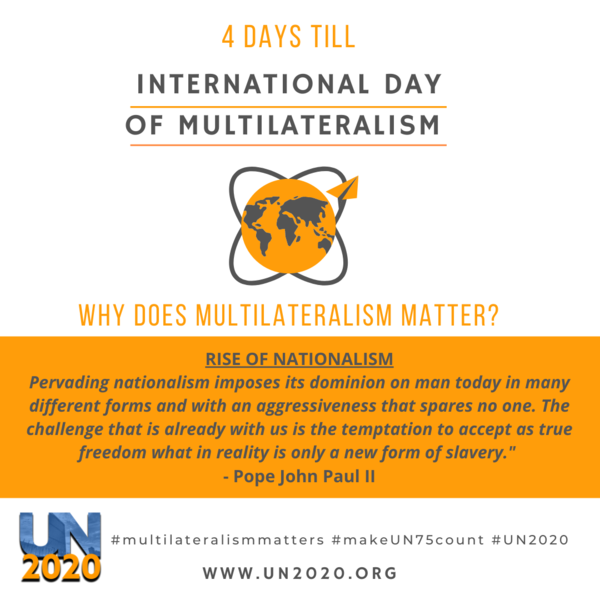 The second issue is how to profit from the 75th anniversary of the United Nations to launch a process for global governance reform. Some of the key recommendations and ideas suggested by civil society to #makeUN75count:

1. A post-UN75 process for UN strengthening

The UN75 political declaration to be adopted by world leaders this September should do more than commemorate the organization’s many past achievements. It should also acknowledge growing challenges to international cooperation, and set the international community on a path toward a more robust and effective UN system. UN2020 calls on member states to establish an Independent Commission on Global Governance as a follow-on process from UN75.

2. The need for global governance innovation during UN75

UN member states need to ensure that the UN75th anniversary is not just a simple birthday celebration. It cannot come and go as just a simple conversation among member states. At the heart of the solutions to today’s challenges lies a sincere commitment to a new posture of collaboration, innovation, and action. The UN’s 75th anniversary is an opportunity to launch a global governance reform process, and this should be reflected in the political declaration that will be adopted by member states in September. Charting a new course for the UN during and beyond its 75th anniversary will depend on leaders who are ready, willing, and able to work together to strengthen our global institutions. In particular, “We the peoples” need a voice at the UN and in global governance, for example through a World Citizens’ Initiative and a UN Parliamentary Assembly (www.unpacampaign.org and www.world citizens initiative.org).

3. Multi-stakeholder processes for an interdependent world

The Charter gives legal decision-making authority to UN Member States. However, on many issues there are numerous stakeholders whose views need to be considered, such as civil society, cities and other local authorities, business, parliamentarians, indigenous communities, migrant communities, disabled groups, regional organizations, and many others. We need a UN that better enshrines multi-stakeholder representation and decision-making. 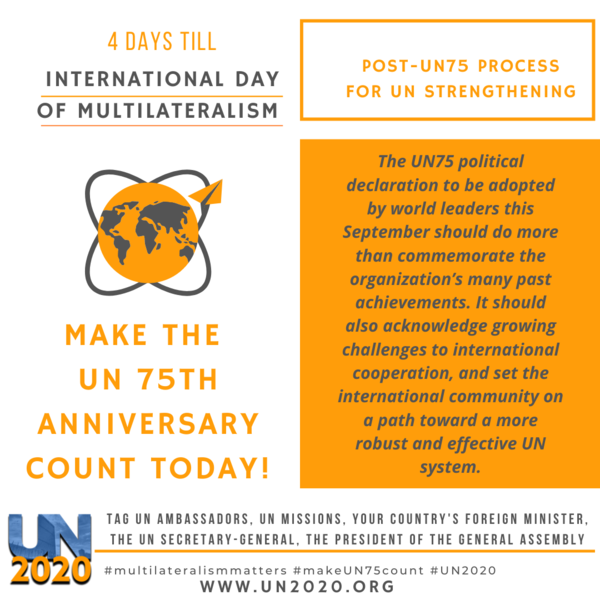 19 April - Today we focus on the global economy and inequality. The present economic system led by giant multinational corporations driven by profits and a return on capital has concentrated wealth at the top, while half the world population can barely meet basic needs at best. Poverty persists in a world with adequate wealth for all. This is unjust and a major source of world instability. 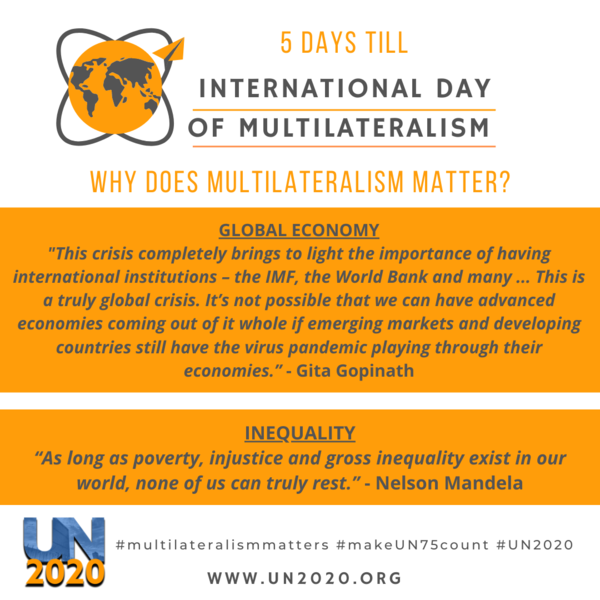 One important element of global governance reform is gender equality. No system of governance works well if half the population is excluded. At the global level as well, the system must ensure a full and equal role for both sexes. The UN Secretariat has made great efforts in this regard, and has been more effective as a result. 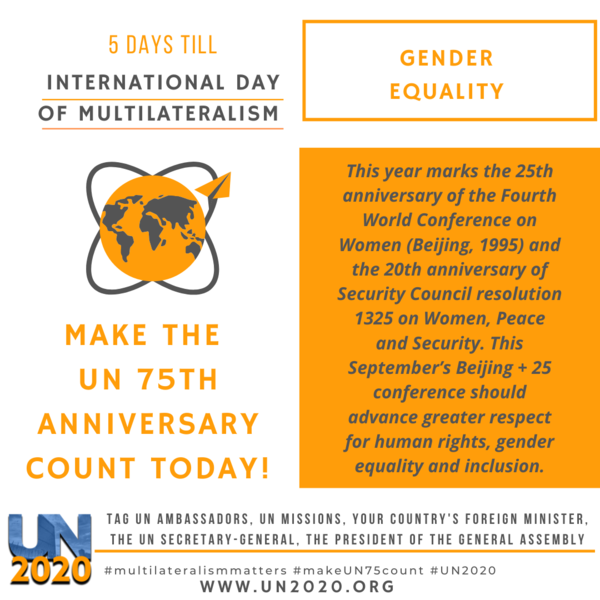 18 April - Today we will be highlighting why #multilateralismmatters by focusing on the current global pandemic COVID-19, a health crisis that knows no borders and can only be overcome through international cooperation.

Former world leaders stress that “global leadership for the COVID-19 pandemic is the only way to not leave anyone behind” and advise against governments working in isolation. Can a unified leadership come together during UN75 to strengthen cooperation? 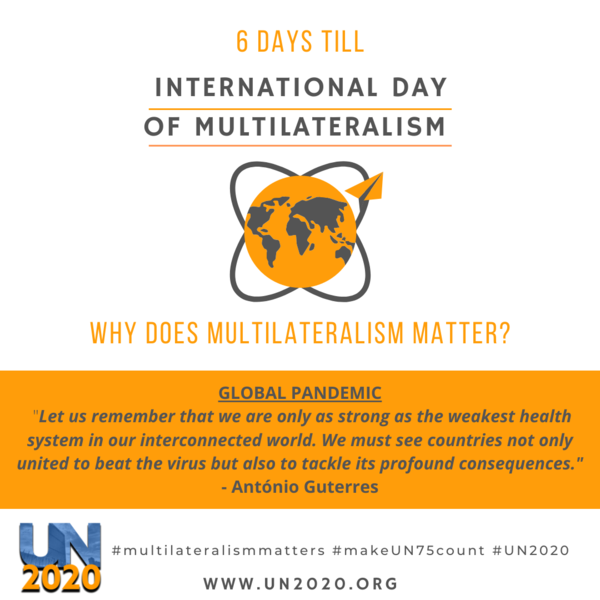 Let’s make a difference together and urge our governments to #makeUN75count by advocating for a ‘Better Funded UN’.

The funding of the United Nations, including its various programmes and agencies, relies on assessed and voluntary contributions from member states. But over the years governments have consistently failed to generate adequate funding for the UN’s work. To meet growing demands, we ask your respective countries to call for a wide-ranging review and reform of the means for providing essential funding of the United Nations system during UN75. 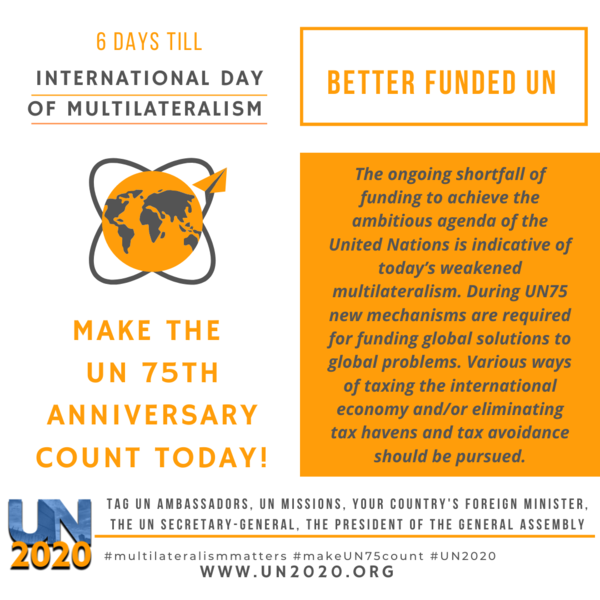