The 23rd annual Justice Conference was held at the de Poort Conference Centre in the Netherlands on 30 March-2 April 2018. The International Environment Forum (IEF) previously partnered with the Justice Conference as its annual conference in 2017 (https://iefworld.org/conf21), so a number of IEF members were present again this year, including Iko Congo, Arthur Dahl, Maja Groff (conference organizer), Sylvia Karlsson-Vinkhuyzen, Wendi Momen, Halldor Thorgeirsson, and David Willis. A side discussion on IEF over dinner allowed us to recruit some new members.

The theme of this year’s conference was “Shining a Light of Illumination in Turbulent and Divided Times”, with both plenary presentations and parallel workshops over the three days. The opening plenary was by Michael Karlberg on “Power and the Baha’i Community”, and our turbulent and divided times were well illustrated by a presentation on the war in Yugoslavia, first-hand experiences of former Baha’i prisoners in Iran and Yemen, and the films “Mercy’s Blessing” and “The Cost of Discrimination”. This report focuses on the parts of the conference with direct IEF involvement.

IEF members Sylvia Karlsson-Vinkhuyzen, Assistant Professor of Public Policy at Wageningen University, and Halldor Thorgeirsson of the UN Framework Convention on Climate Change (UNFCCC) Secretariat, together with Sjoerd Luteyn of soul.com, presented a plenary panel on “The Talanoa Dialogue under the Paris Agreement - Reflections on the illuminating Power of the Reflection-Action-Consultation Cycle”, as well as a follow-up workshop. 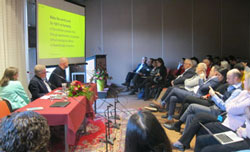 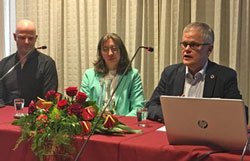 Halldor introduced the concept of the Talanoa Dialogue in implementation of the 2015 Paris Agreement on Climate Change. He has been responsible for organising the intergovernmental negotiations on climate change, and in particular the science-policy dialogue. The Paris negotiations revolved around a moral issue: how much global risk were governments willing to take to limit global warming to 1.5° or 2°C. These are indicators of different levels of global risk, with 2°C an existential risk for the most vulnerable countries. Do you give priority to the scientific necessity to minimize human impacts, especially on the poor, which is based on values and calls for justice, represented by the aspirational 1.5°C target, or do you favour economic and political feasibility, as an engineer would determine what is possible from empirical evidence, with an upper limit of 2°C? Reaching 1.5°C will require unprecedented rates of decarbonisation of the economy. The basis is the scientific assessments of the Intergovernmental Panel on Climate Change (IPCC) at the science-policy interface. Uniting on the necessity to limit warming to a responsible level should change feasibility and make the impossible possible, as the recent rapid expansion of the renewable energy sector is demonstrating. The big question is the legitimacy and efficacy of global arrangements based on national sovereignty. The Paris Agreement represented the beginning of a new governance paradigm, with clear objectives and national stocktaking, national leadership coupled with action at all levels, and international transparency through binding requirement for reporting. An inclusive global, regional and domestic conversation, keeping justice at the centre as a moral compass, will ensure cohesion between global and the local action through multi-level governance. The Talanoa Dialogue, inspired by a Fijian concept of story-telling to build trust, calls for governments and other stakeholders to share positive stories that can encourage further ambition. It forms a bridge between the global and the national, considering three questions: where we are, where we want to be, and how we get there. The Talanoa Dialogue is the precursor to the first comprehensive global stocktake under the Paris Agreement in 2023. Halldor concluded by saying that climate change is testing the moral fabric of the global community and the strength of its commitment to the principle of the unity of mankind.

The Talanoa process is about the ambition of governments to reach the global warming target through a global process of reflection on past actions and what they have led to, future goals to reach and the steps to get there. Sylvia, in her presentation, explored the role of reflection to increase ambition, drawing on experiences from the Bahá’í community. The purpose of the Talanoa Dialogue is to share stories, and build empathy and trust, in order to advance knowledge through common understanding, encourage better decision-making for the collective good, and inform decision-making and increase ambition. It includes inputs to an online platform, and a face-to-face dialogue between government officials and non-state representatives in May, both reporting to the December Conference of the Parties. The method of learning in the Baha’i community includes cycles of reflection, consultation and action. The reflection meeting maintains unity of vision, sharpens clarity of thought and heightens enthusiasm, using a review of vital statistics to suggest the next set of goals to be adopted. The technique is used at multiple levels, enabling learning across the world. It is a process based on equality, containing careful analysis of experience through participatory discussions, providing an earnest and uplifting deliberation on all efforts of a community in an environment imbued with love, where shortcomings are overlooked with forbearance, obstacles are overcome with patience, and tested approaches are embraced with enthusiasm. She left it to the workshop to discuss how these criteria work in the Talanoa Dialogue.

Sjoerd Luteyn spoke on “From despair to hope or unlocking the will to act” in which he shared what soul.com has learned from applying Action, Reflection and Consultation in a corporate environment. Their aim is to transform companies into communities, creating a new mind. Too often a company tries to control its workers, so that less action is possible and there is less trust, with hope diminishing over time. If there is less effort to control the outcome, then it is possible to see more possibilities, increasing hope and then action, followed by reflection to identify progress, increasing hope even further. With less control, there is more trust. With a process of action, reflection and consultation identifying progress and seeing possibilities, there is growing trust, turning despair into hope and unlocking the will to act. 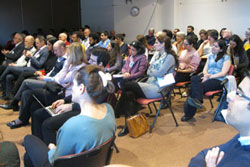 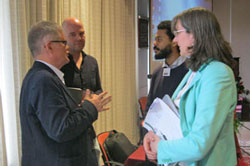 The panel was followed by a workshop moderated by IEF President Arthur Dahl, which started with participants sharing their own experiences with reflection. Reflection builds trust, and having a voice is empowering. Vision is a capacity to see what is happening, with a broad systemic approach, which makes it possible to decide on next steps in unity. It is an inclusive process requiring a change in mindset, and learning to be detached from failures, which are opportunities to learn. It should be non-confrontational and positive, building a collective vision from the differences within the group. Reflection must be coupled with action, including the next steps to be taken, and should be framed by a moral purpose such as achieving justice. 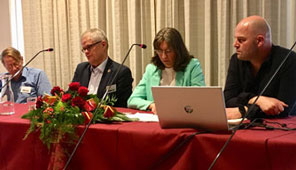 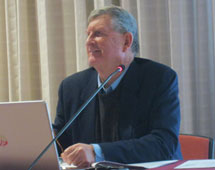 Another workshop was led by longtime IEF member David Willis on “The Unity of Religions: ‘prefer all religionists before yourselves’” based on a statement from ‘Abdu’l-Baha as He was leaving America. David had seen in India how religion was something for everyday use, and the many schools devoted to moral education. He drew on different religions’ approaches to the importance of setting an example, and the common purpose of all the Messengers of God. He also linked prophecies of the native American peoples and their fulfilment in the Baha’i Faith. Consultation and compassion were two gifts that the Baha’is had to offer. The workshop explored what unity in religion meant, and the extent to which religious disunity was one of the causes of the breakdown of society.

Another keynote was by IEF President Arthur Dahl on “The Great Dichotomy: from Egoism to Altruism - from Love of Power to Love of Justice”. He noted that the media drown us in stories of turbulence and division. To find hope we need a wider perspective. A universal theme, the struggle between good and evil, can help us to make sense of our world. Good and evil are not equal forces pulling in opposite directions, but the negative as the absence of the positive, as darkness is the absence of light. We are born with self-love, but our higher human purpose is to grow out of this and bring light. Our individual dichotomy is self versus others, egoism versus altruism, with the ultimate love the love of God. Knowledge faces the same dichotomy, for selfish purposes or to serve others. In the collective dimension of social organization, the dichotomy is between power and justice. Politics reflects the selfish side of human nature, where power corrupts individually and collectively. Justice is for the collective good, ensuring equity for everyone, and collective security for the world. Individual and collective transformation must go together with constant effort, changing ourselves and helping others to change. Our individual and collective problems come from the lack of love and justice, the wrong end of the dichotomy, showing us the direction of travel. The full paper is available at http://yabaha.net/dahl/papers/2018c.html.

The 2018 Justice Conference was another opportunity for IEF members to explore how ethical and spiritual principles combined with science can help us to make sense of the chaotic world we live in today.