This page is an archive of news of IEF members and their activities for the environment and sustainable development, once it is no longer recent enough for the front page of the site or newsletter. Reports on members' involvement in more formal representation of IEF are on the Activities page.

Arthur Dahl again represented IEF at the European Center on Peace and Development's 6th International Conference on National and Inter-Ethnic Reconciliation, Religious Tolerance and Human Security in the Balkans, on 28-29 October 2010 on the Brioni Islands, Croatia, on the theme "Implementing Human Security". He co-chaired one session and gave a paper on "Interstate Collaboration for Human Security: The Lessons from Copenhagen". Participants included former Ministers and Presidents, religious leaders, government officials and academics from across the western Balkans. A declaration on human security was issued at the end of the conference.

Fifteen core members with significant expertise in international environmental governance have been selected to comprise the Advisory Group, out of over 90 who responded to the call for applications. Each of the nine UN major groups and each of the six world regions are represented. Alternates have also been selected and will step in to represent their respective region or major group if the full member cannot be present. They will collaborate closely with the core members of the Advisory Group and be engaged in deliberations.

Members of the Advisory Group include nationals and residents of 21 countries, and, among others, a former minister for environment and energy of Costa Rica, a Champion of the Earth laureate, a retired US Ambassador and former Deputy Director General of the ILO, a retired DuPont manager, former UN officials, professors, students and many with outstanding experience of grassroots campaigning and successful practical achievements on the ground. For the full list of members and more information, visit the IEG Advisory Group page on the Global Environmental Governance website at http://www.environmentalgovernance.org/internationl-environmental-gover…

The Advisory Group will work closely with a larger group of 100 individuals to collect, compile and communicate ideas to the environment ministers deliberating on reform of the international environmental institutions. It has already participated in a one hour teleconference with the Ministers co-chairing the Consultative Group of Ministers or High Officials on International Environmental Governance, and the Executive Director of UNEP.

The European Center on Peace and Development organized its 5th International Conference on National and Inter-Ethnic Reconciliation, Religious Tolerance and Human Security in the Balkans, on 29-30 October 2009 on the Brioni Islands, Croatia. Arthur Dahl was invited to speak on the topic "Human Security and Climate Change: the ethical challenge".

The paper is also available on this site.

Following on from a lecture he gave there last year, IEF President Arthur Dahl was quoted extensively in the blog of the EOI Business School in Madrid. His comments concerned the response to climate change in the lead up to the UN Copenhagen Climate Change Conference in December 2009. Links were provided to the IEF web site. The link to the blog is http://blogs.eoi.es/blogs/open/copenhague-2009-%C2%BFhacia-un-nuevo-protocolo-contra-el-cambio-climatico-2-de-2/.

IEF board member, Peter Adriance, was awarded the Fifth Annual Bridge Builders' Award by the Interfaith Conference of Metropolitan Washington (D.C.) for his ‘passionate commitment to inter-religious care of the earth’ on June 1, 2009. Prior to the award ceremony, Adriance participated in a round-table discussion with three other awardees of Buddhist, Jewish and Christian affiliations discussing the fundamental values and scriptures that inspire the environmental ideals of their respective faiths. Adriance has served as the National Spiritual Assembly of the Baha’is of the United States’ NGO Liaison for Sustainable Development since 1990. Read more at: http://www.ifcmw.org/Default.asp?page=bridgebuilder5. 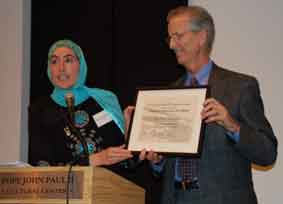 Prior to the award ceremony, Adriance participated in a round-table discussion with three other awardees of Buddhist, Jewish and Christian affiliations discussing the fundamental values and scriptures that inspire the environmental ideals of their respective faiths.

Dr. Laurent Mesbah took part in the International Workshop on Integrated Transboundary Water Resources Management in Southeastern Europe in Sarajevo, Bosnia and Herzegovina, 18-20 May 2009: http://www.unece.org/env/water/meetings/Sarajevo_workshop.htm. He went on behalf of IEF since he could not represent the organisation he works for, the Organization for Security and Cooperation in Europe (OSCE). The conference sponsored by UNECE and RCC was promoting cross border cooperation in South Eastern Europe on water resources management in line with the analysis and recommendations Laurent made in his paper for the 2008 Environmental Diplomacy course coordinated by IEF president Arthur Dahl. He reported that attending the conference was useful for him as he made good contacts among participants and was able to promote IEF too. 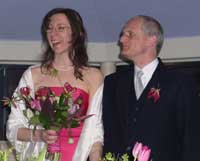 IEF General Secretary and founding board member Sylvia Karlsson married Onno Vinkhuyzen in Delft, the Netherlands, on 21 March 2009. Onno is a member of our partner organization, the European Baha'i Business Forum, and this union was an additional result of the joint IEF-EBBF annual conference in the Netherlands in September 2008.

Two IEF members presented papers at the congress on Climate Change: Global Risks, Challenges and Decisions in Copenhagen, Denmark, 10-12 March 2009 ( http://www.climatecongress.ku.dk). Dr. Sylvia Karlsson spoke on "Transforming institutions that do not exist - the (im)possible task for global energy governance?", highlighting the difficulty of managing climate change without simultaneously managing energy issues, and the lack of global mechanisms for energy governance. Dr. Arthur Dahl's presentation was on "The response to climate change from the Baha'i community", presenting the results of International Environment Forum and Baha'i International Community conferences and events on climate change. The congress brought together 2,200 scientists to provide the latest scientific background for the Conference of the Parties of the UN Framework Convention on Climate Change, meeting in Copenhagen in December 2009.

Dr. Sylvia Karlsson speaking in the session on transforming institutions, and the following panel 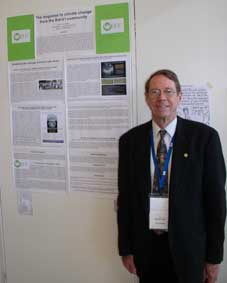 At the 2008 Baha'i Conference on Social and Economic Development in Orlando, Florida, on 19-21 December 2008, the theme was sustainable development. The whole Saturday morning was devoted to climate change and its multiple dimensions, chaired by IEF board member Peter Adriance, and including IEF members Arthur Dahl, Halldor Thorgeirsson and Duncan Hanks, and Baha'i International Community representative Tahirih Naylor-Thimm. The audio recordings of the conference can be downloaded here.

The Archbishop of Sweden convened an Interfaith Climate Summit in Uppsala, Sweden, on 28-29 November 2008. IEF member Paul Ojermark and our Secretary-General Sylvia Karlsson led a seminar/workshop during the summit. More information is available at the summit web site: http://www.svenskakyrkan.se/default.aspx?di=143415. 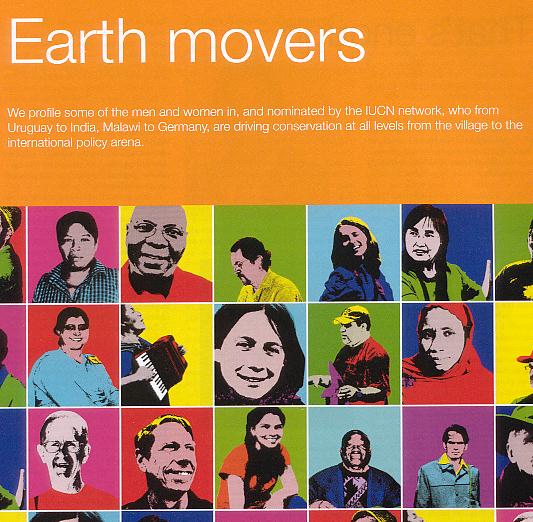 The 60th Anniversary Issue of World Conservation, the magazine of the International Union for the Conservation of Nature (IUCN) includes a special section on "Earth Movers" profiling 20 men and women in the IUCN network who are driving conservation at all levels from the village to the international policy arena. One of those featured is IEF President Arthur Dahl. The profile mentions the IEF and quotes IUCN Policy Officer and IEF member Joachim Monkelbaan. The special issue can be downloaded at http://cmsdata.iucn.org/downloads/wc_en_web.pdf (see pages 16-17). 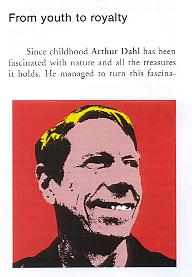 A conference-debate on Ecology and Spirituality in Geneva, Switzerland, on 2 November 2008 featured IEF President Arthur Dahl, former UN economist Edouard Dommen, Mayor of Onex and head of the Socialist Party René Longet, and former Swiss Secretary of State for the Environment Philippe Roch. The conference was co-organized by the Interreligious Platform of Geneva, WWF and La Vie Protestante.

The European Center for Peace and Development, affiliated with the UN University for Peace and based in Belgrade, organized a conference on peace and reconciliation in the Balkans in Milocer, Montenegro, 30 October-1 November 2008. The conference was opened by the Prime Minister of Montenegro and was attended by political, religious and academic personalities from all the Balkan countries including the Metropolitan of the Orthodox Church and senior mullas. IEF President Arthur Dahl spoke on the environment as a force for peace.

Two IEF members presented papers at the Sixth International Conference on Ethics and Environmental Policies, Padova, Italy, 23-25 October 2008, on the theme Ethics and Climate Change: Scenarios for Justice and Sustainability. Joachim Monkelbaan gave a paper on Promoting a Discourse on How Values Drive the Transition to a Sustainable Economy in China, Europe and Elsewhere. Arthur Dahl's paper was on Science and Religion in the Climate Change Debate: Case Study of the Baha'i Community. The case study included a description of IEF activities on this topic. Over a hundred participants took part in the discussions and workshops, and a final document was prepared summarizing the conclusions of the conference. 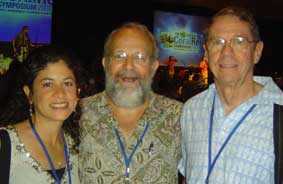 Three IEF members attended the 11th International Coral Reef Symposium in Fort Lauderdale, Florida, on 7-11 July 2008. Dr. Austin Bowden-Kerby, a world specialist on community reef management and coral transplantation for reef restoration, came from Fiji. Elizabeth McLean, who recently moved from Puerto Rico to Buffalo, New York, to study coral reef sponges, also attended. For IEF President Dr. Arthur Dahl from Switzerland, this was the ninth Coral Reef Symposium that he has participated in since 1972. It is normal that IEF members would be interested in coral reefs; the complex ecology of coral reefs provides a good model for human society. Unfortunately, as many of the papers at the Symposium made clear, coral reefs around the world are threatened by overfishing, pollution, global warming and ocean acidification. One paper documenting this was a 90 year record of reef coral changes in American Samoa built on Arthur Dahl's own research there in the 1970s.