Ecological Racism and Deep-Sea Mining in the Pacific

Ecological Racism and Deep-Sea Mining in the Pacific

The G20 Interfaith Forum, where Arthur Dahl chairs a working group on religion and environment, organised a webinar on 16-17 February on the topic "Ecological Racism and Deep-Sea Mining in the Pacific". The video recording is now available at https://drive.google.com/file/d/1b8NSZaiEX1RlaMc40CTAuKDjIb3BQxZg/view?usp=sharing (90 minutes with five panelists and ensuing dialogue) 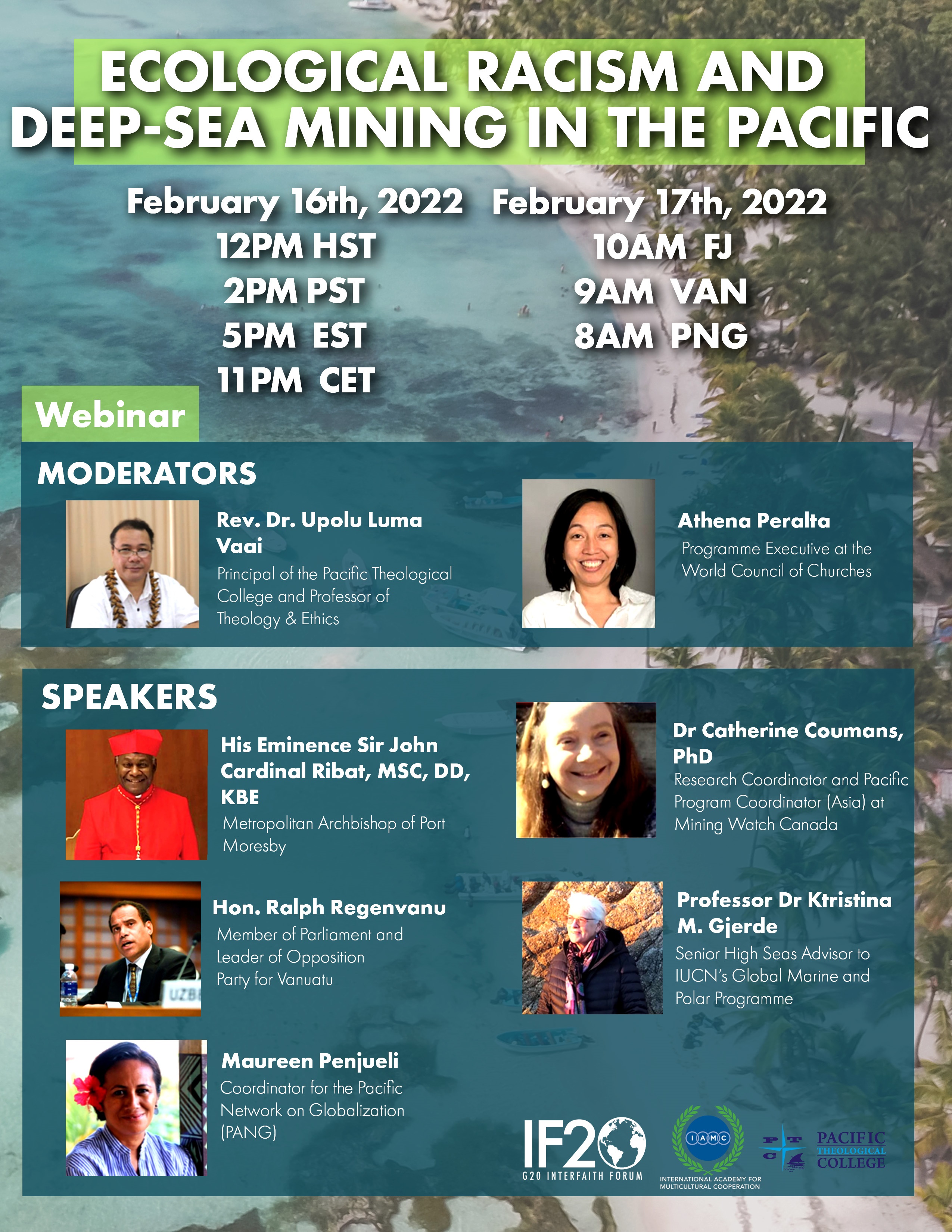 The panelists were:
His Eminence Sir John Cardinal Ribat, MSC, DD, KBE, the Metropolitan Archbishop of Port Moresby, Papua New Guinea, engaged with Global Climate Justice and working closely with other advocates in challenging Deep Sea Mining in the Pacific;
Hon. Ralph Regenvanu, Leader of the Opposition in the Vanuatu Parliament, and former Minister of Lands and Natural Resources;
Catherine Coumans Ph.D., Research Coordinator and Pacific Program Coordinator (Asia) at MiningWatch based in Canada
Kristina M. Gjerde, J.D., Senior High Seas Advisor to IUCN’s Global Marine and Polar Programme;
Maureen Penjueli, Coordinator for the Pacific Network on Globalisation, based in Fiji.
The moderators were:
Rev Professor Dr Upolu Luma Vaai, Principal of the Pacific Theological College in Fiji, whose research and advocacy focus on the intersection between theology, development, ecological and economic justice; and
Dr Athena Peralta, programme executive for economic and ecological justice at the World Council of Churches.

Description: The deep seabed may become one of the last mining frontiers on our planet if the International Seabed Authority (ISA) authorizes mining in the Blue Pacific continent. This is called deep-sea mining (DSM). DSM concentrates on the minerals that are found in the ocean bed in the Pacific ocean known as polymetallic nodules normally formed slowly over millions of years found near hydrothermal vents or in rock fragments in the deep ocean. This is a desperate “race to the bottom” with scientists still unclear of what lives in that ecosystem that will be affected. Such move will rearrange the structure of ocean life, with consequences and far-reaching impacts in addition to climate change impacts. Many from the Pacific and around the world are arguing that while the move could be beneficial to the popularized clean green economic shift to solve the climate crisis, it will be detrimental not only to the ocean but in particular to communities who depend wholly on the ocean for their daily sustenance and livelihoods.

Racism in its traditional definition clusters around the notion of prejudice, discrimination, or hatred that unfairly disadvantages people because of color of their skin or ethnic and national origin. However, racism takes many forms, in particular if it flows through hierarchical and anthropocentric systems and structures. Pacific islanders and many other vulnerable indigenous communities have long suffered from systemic racism imposed by hierarchical economic structures and policies created in another context by another race, that normally extract and remove resources from one race or ethnicity to benefit them. Ecological racism is when one race, Earth included, is unfairly disadvantaged based on someone else’s economic terms and interests. The root cause of ecological racism is ‘greed’ hidden within our approved economic systems and structures, which threatens the legitimacy of regional stability. DSM is a process of extracting resources and life from one race to benefit another. Hence, DSM goes against everything that the Pacific stands for expressed in its ‘whole of life’ indigenous knowledge systems, philosophies of life, and ecological spiritualities.