Earth for All: A survival guide for humanity

Earth for All: A survival guide for humanity

review by Arthur Lyon Dahl
and extracts from https://www.earth4all.life/

Fifty years after the report to the Club of Rome on The Limits to Growth, which I reviewed in 1972, the Club of Rome has assembled the leading creative thinkers on complex systems science, social justice and alternative economics to propose a new vision of the way forward out of our multiple crises. Their new book Earth for All: A survival guide for humanity, by Sandrine Dixson-Declève, Owen Gaffney, Jayati Ghosh, Jørgen Randers, Johan Rockström, and Per Espen Stocknes, a Report to the Club of Rome, was published in September 2022. Executive summaries are available in English and several other languages. There is also a website, https://www.earth4all.life/ from which much of this review is derived.

Earth4All builds on the legacies of The Limits to Growth and the Planetary Boundaries frameworks. Science is at the heart of this work. It rethinks capitalism and moves beyond GDP for a safe, secure and prosperous future in the Anthropocene. It this way, it goes in the same direction as the IEF/ebbf discussion of Global Solidarity Accounting and Community Conversations for Global Solidarity.

The Earth4All analysis focuses on three deeply intertwined systems: economy, society and ecology, or more explicitly: 10 regional economies, 10 regional societies and Earth’s nine life supporting systems. It is grounded in systems thinking, a branch of science that has exploded in the last five decades and whose tools help to understand complexity, feedback loops, tipping points and exponential impacts.

The economic system keeps crashing. It's time to install a new operating system

Earth For All is both an antidote to despair and a road map to a better future. Using powerful state-of-the-art computer modeling to explore policies likely to deliver the most good for the majority of people, a leading group of scientists and economists from around the world present five extraordinary turnarounds to achieve prosperity for all within planetary limits in a single generation.

Coverage includes:
• Results of new global modeling that indicates falling well-being and rising social tensions heighten risk of regional societal collapses
• Two alternative scenarios - Too-Little-Too-Late vs The Giant Leap - and what they mean for our collective future
• Five system-shifting steps that can upend poverty and inequality, lift up marginalized people, and transform our food and energy systems by 2050
• A clear pathway to reboot our global economic system so it works for all people and the planet.

Written in an open, accessible, and inspirational style using clear language and high impact visuals, Earth For All is a profound vision for uncertain times and a map to a better future.

What if the economic system changed its priorities, to work towards wellbeing of all instead of working towards maximising GDP at the expense of ecosystems, climate and societal trust? What if focus shifted to long-term prosperity for all instead of short-term profits for the few? The economy could be a tool at the service of humanity, rather than an end in itself. New economic ideas on how to achieve this are gaining ground. Members of the Earth4All Transformational Economics Commission developed new paradigms for our economic and societal operating system.

The modelling looks at the quantitative and causal interactions between environmental variables and socio-economic variables, such as investments, energy use, taxes, savings, education, inequality and social trust. The figure illustrates a simplified version of over 700 variables triangulated in the global model and over 2000 in the regional models. 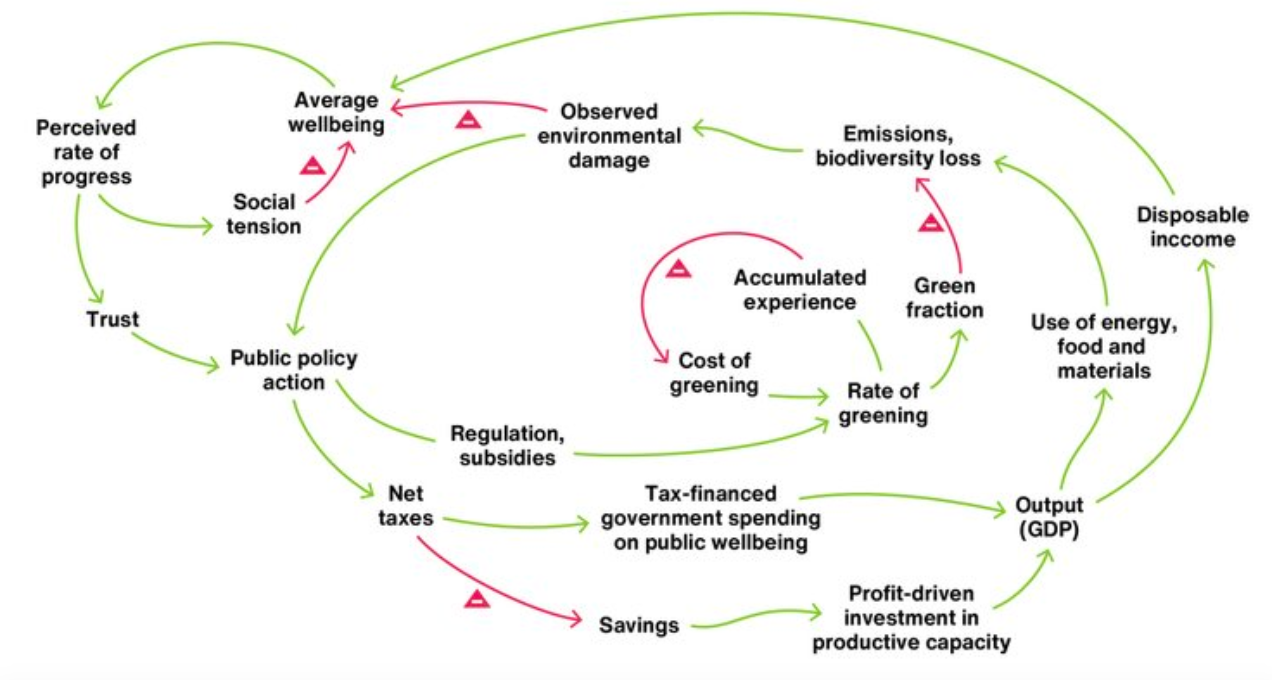 Building on the legacy of The Limits to Growth and the planetary boundaries framework, the new Earth4All model can calculate different consistent scenarios to illustrate how economic policies are likely to affect human wellbeing, societies and ecosystems in the short and long-term future. Humanity has already crossed five out of nine planetary boundaries and experts are exploring if a sixth has been transgressed.

Too Little Too Late: a scenario that explores the path of economic development and unsustainable consumption if they continue on the same course as the last forty years. Will political dysfunction and perpetual crises deepen, or is there a light at the end of the tunnel?

Giant Leap: a scenario that explores a path where societies make extraordinary decisions and investments now that enhance social cohesion, build trust and establish, essentially, a new social contract between people and the state. What if societies start to invest to truly value our collective futures on Earth, and beyond?

The five extraordinary turnarounds presented by Earth4All are the minimum requirements that support wellbeing for all, whilst protecting the planet.

Extreme poverty has declined dramatically in the last fifty years, but still almost half the world lives in poverty, surviving on less than US$4 per day. The poverty turnaround focuses on the solutions to raise the national average income to USD$15,000 per year. At this level, if inequality is restrained, the majority of people can enjoy higher wellbeing, greater economic security and more economic opportunities. This will require rapid economic growth of at least 5% for low-income countries at a time when growth is slowing or even stagnating in the poorest countries. The old strategies to drive growth, driven by energy from fossil fuels, are a dead end. New economic models for low-income countries are necessary. New models can help reverse historic injustices and open the doors for unprecedented investment in clean energy, sustainable food and sustainable cities.

Decade by decade, countries have become more unequal in most regions of the world. In many places, the 10% richest take over 50% of national incomes. This is a recipe for deeply dysfunctional, polarised societies. To find a recipe to build cooperation and trust, new data has shown an unambiguous pattern related to inequality over recent decades: countries with greater equality perform better in all areas of human wellbeing and achievement. A key goal of the Earth4All inequality turnaround is to ensure the wealthiest 10% take less than 40% of national incomes.

Gender equity is essential for a fair and just future, and a stable planet. Massive investment in education for girls and delivering economic security for women are both critically important for a good life within planetary boundaries. This is how to create fair and just societies. Today, societies where everyone feels valued function better, such as the wealthy Nordic countries of Denmark, Finland, Iceland, Norway, and Sweden. They regularly top international polls on innovation, wellbeing and happiness. It is no coincidence that these market economies invest in gender equity and in families. These countries invest in the future. The goal should be full gender equity in terms of agency, rights, resources, and power in both law and employment. There is an important additional benefit. As women have more control over their future, they choose to have fewer children.

The last fifty years have witnessed an astonishing turnaround in food security, with a dramatic reduction in the number of deaths as a result of famine. Progress has, however, come at a cost. The way we farm, transport and consume food affects more planetary boundaries than anything else. Agriculture is one of the biggest sources of greenhouse gas emissions. It is also the biggest driver of deforestation, biodiversity loss and the creation of vast dead zones in our streams, lakes and oceans. Agriculture is not working for people either, with 9% of our global population severely food insecure at one extreme, and 8% of deaths globally attributable to obesity at the other. Our food systems are due a comprehensive redesign to become a regenerative, sustainable food system that works for all within planetary boundaries.

The energy system is at the beginning of the most disruptive transformation in a century. Within a generation most countries could achieve energy security for the first time. This brings with it many more benefits, from clean air and better health to zero fossil-fuel emissions. The Paris Agreement’s goal to stay well below 2°C requires approximately halving greenhouse gas emissions globally every decade from 2020, to reach close to zero in the 2050s. Solutions to halve emissions in a decade are available, affordable and ready to scale rapidly. Crucially, we have reached the critical inflection point where prices of renewables are comparable or cheaper than fossil fuels. Exciting new solutions now exist in sectors that were once considered hard to decarbonise, such as long-distance trucking, shipping, or cement and steel manufacturing. Urgent action is needed to implement these solutions.

It is feasible to redesign economic and social policies to put our societies on a pathway towards wellbeing for all within planetary boundaries.

There is no “one size fits all” for economic systems change. There are different ways to reach the five extraordinary turnarounds depending on different social and political contexts. Actions to drive these turnarounds in the United States and Canada are likely to be very different to actions in Africa, Europe or Asia for example.

Academia is alive with fiery debates about economic growth. Is green growth possible? Is degrowth desirable? What about steady-state economies? Let’s go beyond growth. People should be agnostic about economic growth. It really depends on what is growing. Consumption of many materials cannot keep growing, and greenhouse gas emissions need to be halted. But revolutions in energy and food will drive economic growth. And low-income countries need to grow their economies.

Instead of a myopic focus on economic growth, political leaders should instead ask: is the economy optimised for resilience? Is it improving the lives of the majority? Is it perceived as reasonably fair? Does it protect our planet and the wellbeing of future generations? Does it help deliver the prime goal of a state - to keep citizens safe and secure over the long term? Are we measuring and valuing the right things? This means re-defining what really matters in economic policies. To accelerate change, governments should upgrade our economic system and redefine what really matters in economic policies: wellbeing.

A wellbeing economy is one that serves people and the planet, rather than people and planet serving the economy. Earth4All has developed a wellbeing index as an alternative to GDP that is built on the wellbeing framework. The index quantifies wellbeing based on:
• Dignity: worker disposable income after tax
• Nature: climate change (global surface average temperature)
• Connection: government services indicated by spending per person, i.e., to institutions that serve common good
• Fairness: the ratio of owner income after tax to worker income after tax
• Participation: people’s observed progress (how wellbeing has improved or declined in the previous five years) and labor participation

Such new economic and wellbeing indicators would deliver better outcomes for people and planet and place them at the centre of policymaking. This would support a shift away from unsustainable consumption as a key driver of GDP growth in high-income countries.

What the book proposes is by no means a complete blueprint for economic systems change, but an opening for discussion. Economic systems change will require support of the majority of citizens, but there are deep divisions within many societies. So, a starting point to drive systems change is to bring citizens together around a common agenda, for example through citizens assemblies to help overcome division and polarisation.

It seems daunting, but it is possible

If governments make progress on these extraordinary turnarounds and transform our economic system, if enough political support is created by citizens, we will make wellbeing for all on our planet possible.