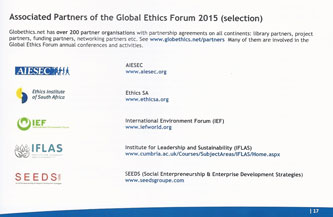 The Global Ethics Forum 2015 was held at the Ecumenical Centre in Geneva, Switzerland, on 25-27 June. The 150 participants came from all over the world to discuss "Responsible Leadership in Action: The Value of Values". In addition to plenaries and panels, there were 12 workgroups that met three times to discuss tools and prepare projects to implement them. The International Environment Forum has been an Associated Partner to Globethics.net and the Global Ethics Forum for several years, and it was one of five such partners (out of 200) to have its logo featured in the conference brochure. ebbf - Ethical Business Building the Future is also an associated partner. IEF was represented this year by Arthur Dahl and Joachim Monkelbaan, and ebbf by Nauman Hussain and Caroline Zagrecki Sawicki. 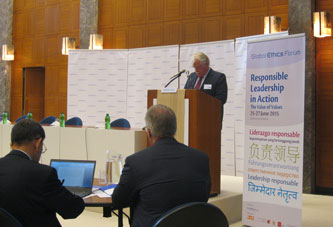 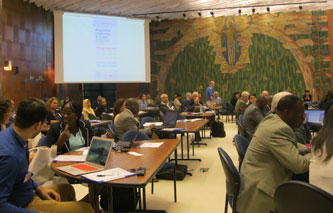 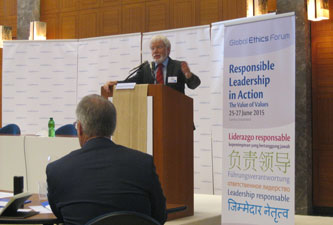 In the opening keynote by Musimbi Kanyoro of Kenya, President/CEO of the Global Fund for Women, she asked what was responsible leadership? It is learning how to lead together with others, with a common perspective, sharing ideas, the journey and the credit. You change yourself to align with others, finding a course together. Such a leader is balanced by values, grounded in mission, inspired by vision and pragmatic in practice. Failing is part of good practice, trying things to learn from them, encouraging more honesty and forgiveness. Finally, a responsible leader knows when to go, when it is time for a change. 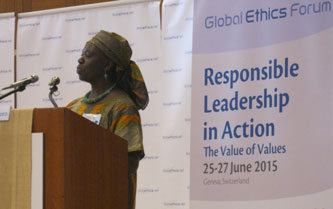 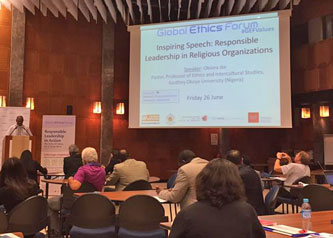 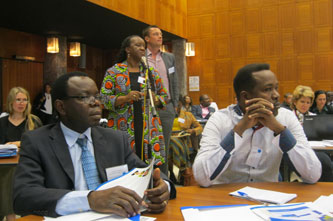 Musimbi Kanyoro giving her keynote; part of the audience with Arthur Dahl on right; Joachim Monkelbaan (back centre) waiting to ask a question

The opening panel on State of and Need for Responsible Leadership, was moderated by Deon Rossouw of the Ethics Institute of South Africa. Alexander Ageev, Director of the Institute for Economic Strategies in Moscow, listed the challenges or revolutions that were coming: the end of the world, the genetic revolution, the manipulation of brain functioning, mass migration, the economic cult of GDP versus the spiritual emancipation of measures of happiness and well-being, crises in the financial system, transparency in all things and a revolution against transparency, new technologies with military uses, and many other competing issues calling for creativity, empathy and integrity. Jem Bendell of the Institute for Leadership and Sustainability (UK) talked about enabling everyone to lead together through mutual responsibility, group literacy and shared values. Liu Debing of the Center for International Business Ethics, China, described classical Chinese leadership as starting with individual cultivation, nurturing sincerity, seeking perfection, and learning happiness in the home before harmonizing the nation and pacifying the world. Responsible leadership required integrity, responsibility, passion, a win-win spirit and willingness to learn. Florencia Luna of the Bioethics Program, FLASCO, Argentina, described the risks from contagious diseases in an interconnected world, and the need to protect the most vulnerable. The discussion that followed raised the issues of interconnectedness and human rights, the responsibility of leadership for the ecological crisis, and the need to practice systems thinking. 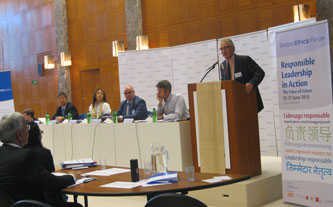 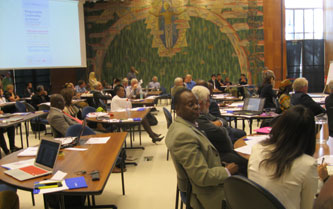 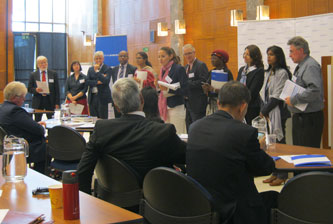 The working groups discussed implementing general codes and standards, such as an institutional code of ethics, reducing inequalities by providing equal access to education and jobs, and implementing integrated reporting; as well as innovating leadership through women, investment and the media. A second set of themes included improving values-driven leadership in business, higher education, politics and religion. 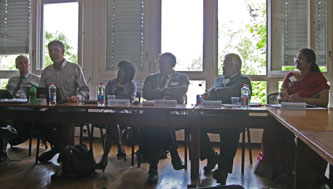 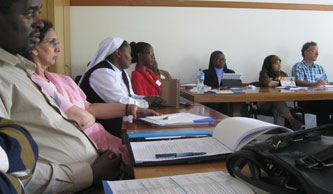 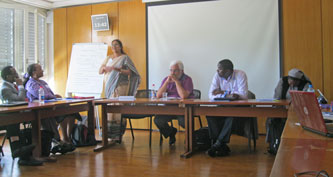 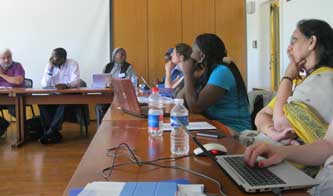 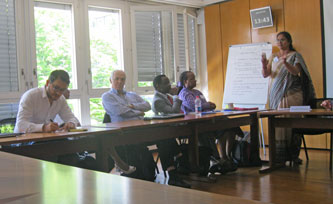 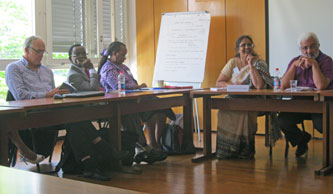 The first day concluded with a public event at The Graduate Institute featuring a panel on Developing Systems and Strengthening People for Responsible Leadership, musical entertainment by artists from the Globethics network, and an address by the Mayor of Geneva, Madame Esther Alder. 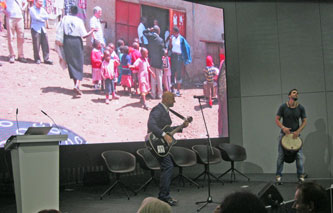 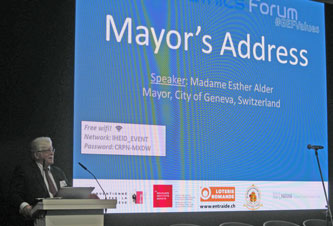 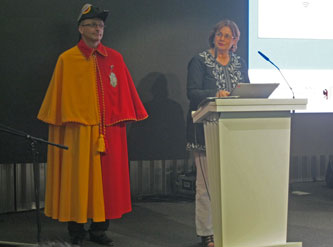 On the panel, Kamel Ayadi of the Global Infrastructure Anti-corruption Centre in Tunisia talked about responsible leadership in business and the need for tools and standards such as ISO 26000, the Global Reporting Initiative and Global Compact, and a new ISO 37001 antibribery standard, and the difficulty of distinguishing sincere efforts from simple communications, requiring the commitment of top management. Liu Debing of China described how continued learning was necessary with globalization and rapid change. Divya Singh, Vice Principal, University of South Africa, called for values-based leadership in universities. Training ethical global citizens required more holistic approaches beyond the siloed academic disciplines with real community engagement. Universities needed to be socially responsible, and to assess their impact in the community. Cedric Dupont of The Graduate Institute said responsible leadership combined vision and imagination to provide solutions, with creative destruction of the status quo. Contributing to the global interest required values inclusive of diversity, thinking globally, holistically and independently, and embracing change. It was necessary to break preconceived ideas and established world-views, to use foresight tools to think about the future, and be comfortable in a zone of discomfort, with the ability to listen, communicate and tell stories. In the discussion, Caroline Zawicki of ebbf described the experience of Nur University in Bolivia requiring 120 hours of service to the community and thus creating an awareness of social realities.

The second day opened with inspiring speeches by Obiora Ike, Pastor and Professor of Ethics and intercultural Studies in Nigeria, described the emergence of transparent processes for religious leaders in Africa. Vasanthi Srinivasan of the Indian Institute of Management in Bangalore referred to ethics in politics and public administration and the challenge of fighting corruption at all levels. Paulachan Kochappilly, Professor of Moral Theology in India, talked about celebrating transformation and change, with enlightenment inside to truth, goodness and beauty leading to a desire for service in responding to the needs of the deprived. Naupess Kibiswa of the African Centre for Peace, Democracy and Human Rights in DR Congo said there was no civil society under dictatorship in his country, but a recent rise in civil society organizations as an intermediary between the people and the state, filling gaps in state services and where people were abandoned to militias. Tayfun Zaman of the Turkish Ethics and Reputation Society referred to the need for trust in business. Most of a multinational's value was in its reputation. A business leader must inspire values in the company as a hard-core asset for employees, customers and the whole world. 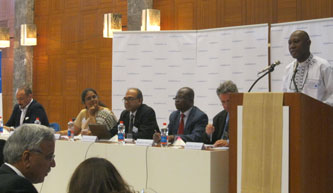 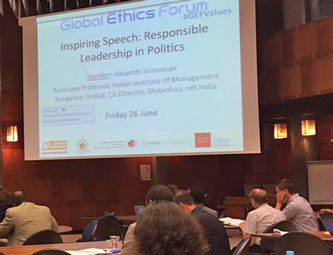 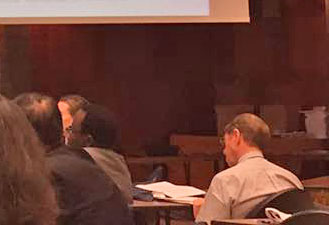 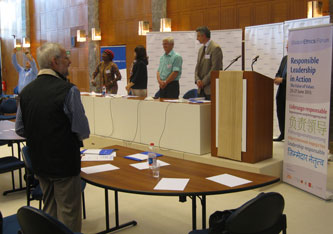 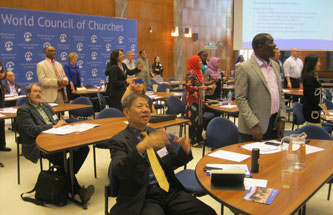 Workgroup leaders report back to an enthusiastic audience

The workgroups continued their work and reported their outcomes in the closing session. There were also announcements of the Code of Ethics collection in the Globethics.net Online Ethics Library, and the new Globethics Academy online courses. The annual Global Ethics Forums and their sponsoring organization Globethics.net demonstrate the world-wide interest in ethics as a foundation for efforts to create a better world.