The Ambassador of France in BiH, Ms. Claire Bodonyi, explained that all countries of the world will discuss the future of Planet Earth at the Conference in Paris. "Our future and the future of our grandchildren will be discussed. Climate change understands a change of lifestyle. The Paris Conference will address four points: the treaty that all countries will be required to abide by, the national contributions, the agenda for solutions, and the issue of payment for energy transition. So far, 169 countries have committed to reducing of greenhouse gas emissions. This is the proof of their will to work on changes.“

"People all around the globe are struggling with the impact of climate change. The citizens of BiH witnessed climate change first-hand with the terrible floods last year and this summer’s devastating droughts. Human beings are directly causing and accelerating climate change, and at the core of this issue is our very survival on this planet. The good news though, is that it’s not too late to curb emissions, limit the damage, and seize the environmental, economic, and security benefits of a cleaner, greener energy future", said Ms. Maureen Cormack, Ambassador of the United States of America in BiH.

"Global and local challenges brought by climate change are also an opportunity for collaboration and solidarity at every level. In the Balkan region and in Bosnia and Herzegovina these are indeed opportunities for better cooperation, more coherence and integration between governance units, institutions, the private sector, communities and individuals. Such a strategic sustainable view provides a more hopeful vision for the youth and upcoming generations", said Dr. Laurent Mesbah professor at the American University in Bosnia and Herzegovina and a founding member of IEF. 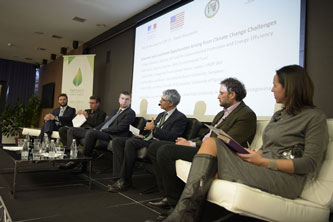 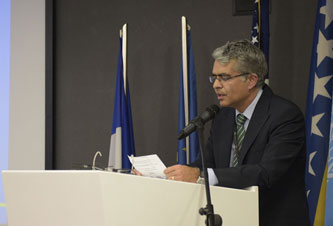 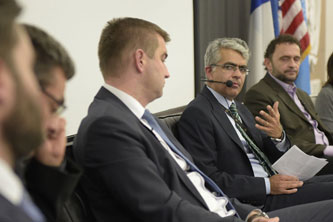 Climate change and environmental experts, representatives of ministries, environmental protection funds, international and national organizations, universities and civil society organizations discussed the opportunities and challenges brought about by climate change in Bosnia and Herzegovina at the Conference. The opportunities for BiH include economic development in diverse sectors, such as the energy sector, including development of renewable energy sources: hydro and solar energy, wind energy and biomass energy, in order to thus reduce the use of coal and heavy industry.

The goal of the Paris Climate Conference COP21 that will be held from 30 November to 11 December is to adopt the global agreement, which will set the framework for the transition towards the societies and economies with low emission of carbon dioxide, who are willing to confront the climate changes. The future international agreement relates primarily to ensure equal reduction – the efforts to reduce greenhouse gas emissions – and the adaptation of societies to the forthcoming climate changes.