Several members of the International Forum participated in the 21st annual Justice Conference at de Poort, the Netherlands, a Bahá'í-inspired forum for the exploration of international law, global governance, justice and ethics, which draws lawyers and other experts from all over the world. The theme of the conference this year on 25-27 March was "Justice in Action: From Local to Global". Ismael Velasco presented his work on suicide prevention with young people in Greenland, gave a workshop on "The Next 30 Years: Perspectives on Radical Technological Change & the Social Transformation of Justice - Trends, Prospects and DiIemmas", and also entertained with evening story-telling. Sylvia Karlsson-Vinkhuyzen spoke on a plenary panel on "Perspectives on Global Order and the Rule of Law" looking at issues of accountability. Arthur Dahl gave a keynote on "Using the new UN 2030 Agenda to work for justice at the local level". IEF members Nigel Jollands, Wendi Momen and Iko Kongo also attended the conference. 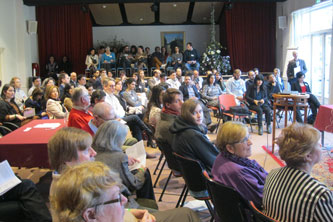 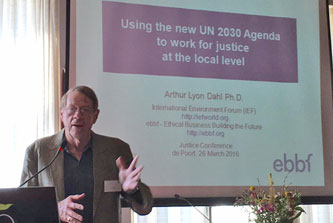 The conference; keynote by Arthur Dahl

Sylvia and Arthur also ran a workshop on the Paris Climate Agreement negotiations. The workshop reviewed the dynamics of the complex multiyear negotiations leading up to COP21 that resulted in the Paris Agreement adopted on 12 December 2015, and discussed the many opportunities for participation in discourses alongside the negotiations, including the side events that IEF organized in Paris (http://iefworld.org/cop21). It explored the lessons for international governance, the role of Bahá'í-inspired organizations, and the ways such events can be used to contribute Bahá'í perspectives on issues important to society. 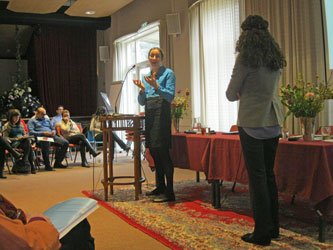 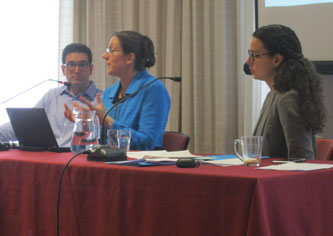 Other high-level presentations included a session on Building a Global Human Rights Campaign: Education is not a crime, with film-maker Maziar Bahari, and the screening of his film "To Light a Candle". John Christensen of the Tax Justice Network spoke on "Catalysing Policy Reform at National and Global Levels: Tax Justice, Economic Inequality and Human Rights". The final plenary was by Kirsten Meersschaert, Director of Programs of the World Federalist Movement-Institute for Global Policy, working on the Coalition for the International Criminal Court and the International Coalition for the Responsibility to Protect, and Susan Lamb, Senior Legal Advisor to the Commission for International Justice and Accountability, which is collecting evidence of violations of international criminal and humanitarian law in Syria. 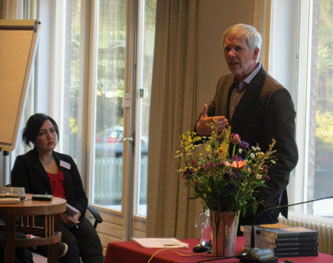 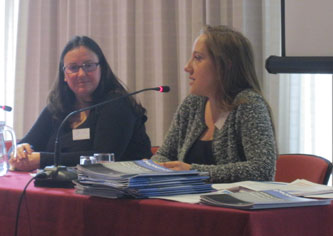 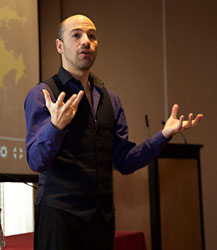 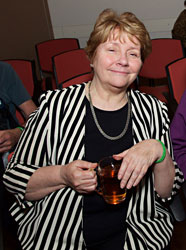 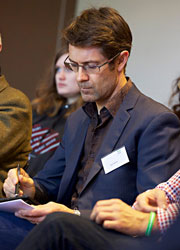 While he was in the Netherlands, Arthur also gave two seminars at Wageningen University where Sylvia teaches, one on "Is Science Enough? Exploring the relationship of science and religion in addressing sustainable development" where about 36 students and faculty members came for a discussion over lunch. The second seminar was on "Management of coral reef ecosystems" for the coral reef research group.