Erik Solheim, Under-Secretary-General of the United Nations and Executive Director of the United Nations Environment Prorogramme (UNEP), spoke on "Faith and Environment" at the Baha'i House of Worship (Lotus Temple) in New Delhi, India, on Wednesday 5 October 2016, with more than hundred people attending from the diplomatic corps, representatives of civil society groups and faith-based organizations, academics, students and journalists. 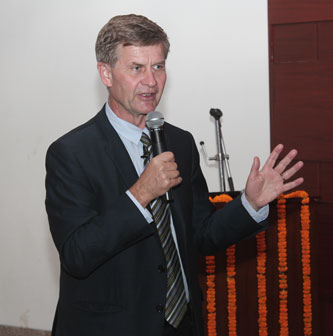 Mr. Solheim began his talk by saying that the Baha’i House of Worship is one of the most beautiful expressions of the Faith. Appreciating the diversity in India, he said, “India is a miracle, because no country is as diverse as India. It has more religions and languages than any other country and making all different religions come together and respect one another is a miracle”.

Mr. Solheim acknowledged that religion is the source of motivation for many and this motivation should lead to a rise in consciousness about one’s role in environment protection and preserving natural resources. Religious leaders, he said, can play a part here and should talk more about the environment. When we build on what is good in religion, it can become a positive and deep source of true motivation in people to bring about change. But when religion is abused it produces fanaticism, division and conflict. He felt that the key to avoiding religious conflict was for religious groups to avoid a sense of superiority and self-righteousness, thinking that their religion is the best while others are ignorant. This, he says breeds fundamentalism and extremism as we see in world today.

He reiterated that religion is absolutely essential and we need more interfaith dialogue. We have to work in every part of the planet to tap into our potential to protect the environment. As the head of the UN Environment Programme, he would like to work with faith-based organizations.

He stated that we should consider the relationship between science and religion. It is essential to start with science to understand environmental issues and then use religion for outreach and dialogue to engage with the masses. The United Nations is a science based organization. Through constant dialogue between the United Nations and religious organizations, he said, we have to take the message to the people. Therefore the ultimate aim of the United Nations was to make everyone realize that they owe a responsibility to give to the next generation an environment a little better than what we inherited. He emphasized how important it is for us to learn to embrace religion and science.

Mr. Solheim gave as an example that we need to believe in astronomy not astrology, chemistry not alchemy. He also said that religion can give human beings a sense of dignity. All religions teach that we should protect our resources and the environment we live in. Religion does not believe in destruction of nature. Therefore we should live in harmony with nature.

Expressing his concern about the environment in India, Mr. Solheim said that the country needs to work rapidly to deal with its waste problem and it needs inspiration at all levels including at the grassroots. Mentioning civil society groups, he said that they have limited outreach whereas the religions are present in all parts of the society and have a wider outreach to the grassroots.

Replying to an audience comment from a faith based organization, suggesting that we should talk about spirituality rather than religion, Mr. Solheim said that spirituality is what is common to all religions. Religions teach us moral values but we cannot separate religion from the historical context. He then said that, as a Christian, he follows the morals in the Bible such as, “Do unto others as you would have them do unto you”. This is directly connected to the historical figure of Jesus Christ. We cannot just talk about spirituality without taking into account the historical context of the teaching.

Mr. Solheim concluded by reiterating that all religions have a message of decency and responsibility to convey what we have for the future generations. He also appreciated the efforts of the Baha’i House of Worship to conserve natural resources.

The recording of the talk can be viewed here.

About Erik Solheim:
Prior to joining UN Environment, Solheim was the Chair of the Development Assistance Committee of the Organization for Economic Co-operation and Development (OECD). From 2007 to 2012, Solheim held the combined portfolio of Norway's Minister of the Environment and International Development and, from 2005 to 2007, served as Minister of International Development. This unique portfolio mixture allowed him to bring a coherent approach to development and the environment. Solheim is also an experienced peace negotiator, having acted as the main facilitator of the peace process in Sri Lanka from 1998 to 2005, and has contributed to peace processes in Sudan, Nepal, Myanmar, and Burundi. In addition to his career as a Minister and at the OECD, Solheim has served as UN Environment's Special Envoy for Environment, Conflict and Disaster since 2013 and as a Patron of Nature for the International Union for the Conservation of Nature since 2012.