The European Center for Peace and Development, affiliated with the University for Peace established by the United Nations, has been working for over thirty years on reconciliation, religious tolerance and human security in Eastern Europe and most particularly the Western Balkans. Based in Belgrade, Serbia, with branches throughout the Western Balkans, it convenes meetings, encourages research, and offers advanced degrees on issues related to peace in the region. The International Environment Forum, through its president Arthur Dahl, has been supporting these efforts for the last decade.

On 27 October 2017, ECPD held an International Round Table in Belgrade City Hall on ”Peace and Democratic Multilateralism”, chaired by H.E. Prof. Dr. Federico Mayor, former Director-General of UNESCO, President of the Foundation for a Culture of Peace, and President of the ECPD Council. Other opening speakers were Dr. Ouided Bouchamaoui, Nobel Peace Prize 2015, and H.E. Prof. Dr. Erhard Busek, former Vice-Chancellor of Austria. Panels of distinguished speakers addressed “Global Institutions to Face Global Threats”, “Peace and Development: Integral, Endogenous, Sustainable and Human Development for a Dignified Life for All”, “UN Priorities in the New Era: Food, Water, Health, Environment and Education”, “The Agenda for Peace: The Declaration and the Programme of Action for a Culture of Peace”, concluding with “Concrete Proposals for Peace and Non-Violence at the Worldwide Level”. Arthur Dahl was a rapporteur for the round table, chaired one session, and presented a paper on “UN Charter Revision as the Foundation for Peace” based on joint work with Augusto Lopez-Claros and Maja Groff. 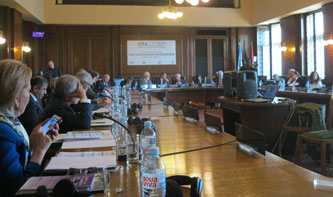 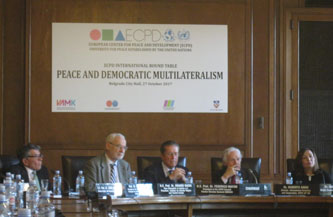 The wide-ranging presentations raised many important issues for peace. There were diagnoses of the problems, such as fragmentation, identity politics, xenophobia and populism, growing inequality, the failure treat migration properly in Europe, and the possibility that the third world war has already started. There were also proposals for solutions and ways forward.

The crises in the world show the importance of solidarity and dialogue as both an ideal and a requirement to address emergencies and to respond to globalisation with a new equilibrium. It is easier to declare war than to end a state of war, since there is little incentive to end warfare if you are not directly suffering from it, leading to a negative spiral with no answer.

It is essential to modify the United Nations to become a federal democracy, more participative, with new structures to replace national sovereignty and egoism. Alternatives like the G7-G20 are divisive and have not been effective. we must either act now, or wait to be forced to act. Radical changes are needed to make the UN an effective structure for action with a new paradigm for governance. The UN needs to adapt itself to fight terrorism, and to attack the roots of the problems that lead to terrorism, bridging the gap between the West and the Islamic world. The UN General Assembly should become a more representative legislative body, and means of enforcement should be strengthened and made mandatory, including an International Court of Justice with binding jurisdiction over all states. One proposal was for two new security councils for the environment and for social-economic issues. The Sustainable Development Goals are a point of departure and an opportunity to strengthen the framework for multilateral development.

With the progress in science and technology, a new civilization is not a utopia but a goal to be approached gradually. Research and education need to be emphasized. The focus should be on human beings and our global human purpose. A sense of global citizenship is stronger today in developing countries and among young people, and regressing in more industrialised countries. Our common sense of humanity needs to be strengthened to overcome an increasingly individualistic world. What we are lacking is visionary leadership.

The proceedings will be published by ECPD.

The next day, ECPD organized a Global Youth Forum with over 50 participants from many countries, on ”Youth Peace-builders for a Sustainable Future”, for which Arthur was a co-chair and moderator. Federico Mayor, Ouided Bouchamaoui and Erhard Busek again gave opening keynotes on the importance of youth for peace. The text of the Nobel Peace Laureate’s speech is given below. 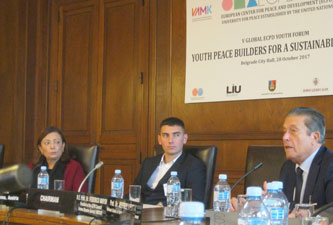 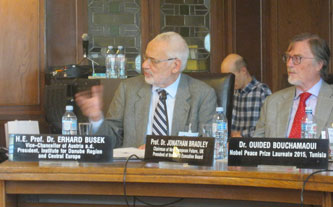 In the morning, presentations were given on “Peace and Education as Inseparable Aspects of Civilization”, and on “Unity in Diversity: Inclusion for a Sustainable Future”. One group called Youth United for Peace described their local efforts to heal the wounds caused by the fighting in the different cities of Bosnia and Herzegovina. Other youth were supporting the rapprochement process in divided Cyprus. Another group of youth organized a dialogue caravan through Serbia. There was a strong emphasis on vulnerable groups, exclusion, and the involvement of women. Dr. Farhang Tahzib described capacity building through the Youth Spiritual Empowerment Programme, with several participants present among the youth. 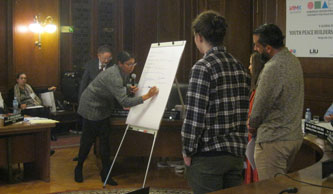 The afternoon was occupied with workshops on “Conflict Prevention and Interfaith Dialogue”, “Building Peace Online: How the Internet and Social Media can be Utilised for Advocacy and Peace”, and “Essential Skills for Today’s Sustainable Development Challenges”. There was an interesting report on research in Catalonia on youth use of the Internet for religion, with 65% of the youth considering themselves believers, and the creation of online communities but not yet much interreligious dialogue. Youth were drawing on the messages of Jesus, Luther, Abraham, Baha’u’llah and Muhammad in the search for trust, knowledge, a desire to help, good timing, and the power of persuasion. 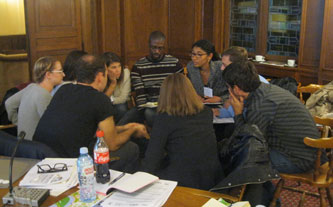 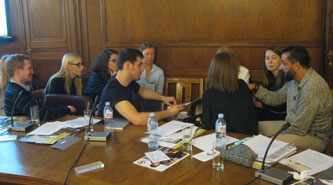 The participants in the Youth Forum went away stimulated, encouraged and motivated to work even harder for peace and sustainability. 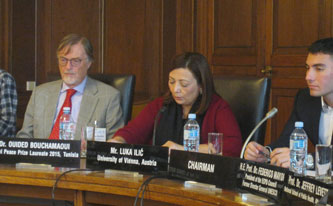 Never before in the history of mankind have the subjects of education and peace been so acutely and seriously felt. We are constantly reminded of their importance by the daily tragedies occurring in the four corners of the planet.

Tragedies caused by under-development, poverty, exclusion, unemployment, ignorance, social tensions, conflicts, wars and terrorism are all daily reminders of the prominence of the issues related to education and peace and of the extent to which they are intertwined.

In our daily struggle against all of those problems we can only brandish peace as a weapon. We do it by promoting education, sport, culture, and all values underlying “living together” such as tolerance, accepting others no matter how different they are in nationality, race, faith, or skin color.

We have to stand united against atrocity, ignorance, decadence, fear, intimidation, and all those who want to spread terror.

It is through propagating knowledge and upholding the universal values of coming together, tolerance and freedom, through investing in art and culture, and through providing equal chances and fair access to wealth that freedom-loving countries can forever consecrate peace as a daily practice and stand steadfast in the face of all types of extremists.

By being anchored in the values of tolerance and openness, The European Center for Peace and Development creates opportunities for people to come together internationally and engage in actions which consecrate these values.

Today, Mankind is facing a serious challenge: create a world with stronger bonds of solidarity. It must be a world full of justice and equality, where sharing and mutual respect are daily practices, and where the wellbeing of each individual comes from his or her contribution to the general prosperity.

Because of the violent transformations happening in our world, and because ignorance, intolerance, exclusion, and underdevelopment are feeding conflicts and violence, we have to more than ever respond with education for peace, human rights, democracy, tolerance and mutual understanding between cultures; in other words, we have to educate future citizens of this world about the principles of “living together”, about respecting each other and transcending all of our differences, be they in culture, religion, origin, or other. We need to create bonds of friendship beyond our frontiers; we need to be curious about other ways of life. History teaches us that whenever cultures came into contact with each other for peaceful exchanges of ideas and knowledge, the entire humanity progressed. It is then our duty to keep that flame burning.

Educating youth on how to become citizens must also be done in a global perspective. In other words, we need to find ways to prepare youth and allow them to take part in the decision process of issues crucial to the future of all peoples. In an increasingly interconnected world where the actions of each one of us can have far away consequences, there is no longer room for policies of isolationism, exclusion, and closure. Our destiny is to live together; so why not have future generations develop right now their understanding of the concept of “living together” and the competencies needed for that?

Our modest experience in the National Dialogue in Tunisia has taught us that whenever there is a will to do it, living together is possible. Thanks to dialogue, to listening to what the other has to say, and to a common desire to accept our differences, we were able with our social partners to extricate our country from its political crisis. It is obvious that experiencing intercultural learning as applied here can only strengthen the values of dialogue and openness.

I thank you once again for this opportunity to participate in this important Forum, which, given the quality of the participants, will be a new milestone in the promotion of Peace education for our Youth.