As part of a United Nations-wide effort to strengthen its relationship with religions, led by a UN Task Force on Religion and Development, UN Environment (formerly UNEP) is developing a Strategy for Engaging with Faith-Based Organizations. To help it finalize the strategy, UN Environment organized a Consultation meeting on Engaging with Faith-Based Organizations in Nairobi, Kenya, on 30 November 2017, among the events around the 3rd UN Environment Assembly. Participants represented Islam, Christianity, Buddhism, Bahá’í, Judaism, Hinduism, Spirituality and interfaith organizations, and global, national and local perspectives. The International Environment Forum (IEF) was invited to represent the Bahá’í Faith, with Arthur Dahl as the IEF participant. 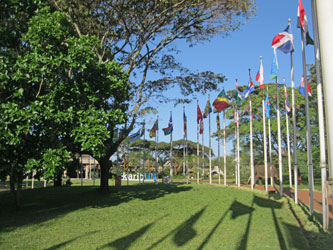 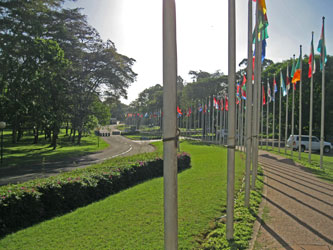 The purpose of the meeting was to agree on the Strategy objectives and activities; identify top priority environmental issues of mutual focus; map global, regional and local environmental Faith-Based Organizations (FBOs); identify existing Knowledge management tools and networks; share existing experience and involvement; identify faith-based investment entities; and make commitments of specific support. Each organization replied to a detailed questionnaire on these topics, and also made a short presentation during the meeting.

The UN Environment Strategy for Engaging with Faith-Based Organizations aims to inspire, empower and engage with Faith-based Organizations to innovatively deliver on the Sustainable Development Goals and Agenda 2030 at all levels. The strategy has three major goals:
1: Strengthen Partnerships with Faith-Based Organizations’ Leadership for Policy Impact
2: Green Faith-Based organization’s assets and transform Financing the SDGs
3: Science-Faith-Based Evidence
It includes detailed lists of outputs and corresponding activities for each goal. It is intended that the initiative should be directly linked to the Office of the Executive Director in the Division of Policy and Programming, with an advisory committee representing major faith-based organizations and religions to provide guidance and direction.

The meeting was opened by Erik Solheim, Executive Director of UN Environment, after which Dr. Iyad Abumoghli, Principal Advisor to UN Environment on Strategic Engagement with Faith-Based Organizations, summarized the proposed strategy, and Alexander Juras, who heads the Major Groups and Stakeholders Unit, described synergies between these groups and UN Environment. 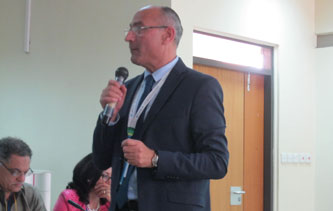 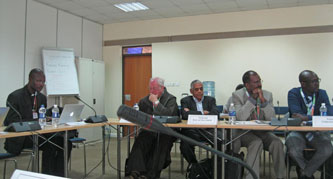 The head of the UN Task Force on Religion and Development, Dr. Azza Karam, made a presentation by video link on the experience of the Task Force. The Task Force began functioning informally in 2007, and was formalized as part of the UN Development Group in 2010. Its members represent 17 UN system entities involved in development, peace and security, and human rights. Its objectives are to:
- Seek information, scientific knowledge and secure sharing thereof around religion, religious groups and religious engagement (research, policy roundtables);
- Build internal UN system capacities around religion, religious groups and religious engagement (strategic learning exchanges/trainings, database of interfaith networks);
- Advocate/advise on religion, religious groups and religious engagement at intergovernmental gatherings (functional commissions, High Level Political Forum, UNGA);
- Provide policy guidance/advice to UN management (World Humanitarian Summit);
- Serve as a UN-portal for FBOs to access more information and knowledge and enhance partnerships with UN system entities (UN NGO committees, etc.).
Some of its achievements include countering narratives of violent extremism, expanding and innovating in the way we do development, supporting environmental protection and stewardship (with UN Environment, Yale University Environmental Network and WWF), countering harmful human rights practices perpetuated in the name of religion, ensuring freedom of religion and belief and protection of religious minorities, defining decent work, and supporting informed religious knowledge for women’s empowerment and gender equality. The task force has acquired a lot of experience on what to do and not to do in dealing with faith-based organizations.

Many of the organizations present shared their experiences on environmental stewardship, ranging from running international universities to national networks and local community activities. The IEF described the long involvement of the Bahá’í International Community with the United Nations, and its environmental engagement starting at the 1972 Stockholm Conference on the Human Environment, and continuing with the Rio Earth Summit in 1992, the World Summit on Sustainable Development (2002) and Rio+20 in 2012, with at least 36 statements on issues relevant to the environment and sustainability. It then explained the role of IEF as a Bahá’í-inspired professional organization for the environment and sustainability, accredited by the UN in the science and technology major group, maintaining web resources, designing interfaith courses, organizing annual conferences and side events at UN conferences, producing a monthly newsletter, and partnering in other networks. It also mentioned another Bahá’í-inspired organization, ebbf-Ethical Business Building the Future, that encourages sustainability in business and the workplace. 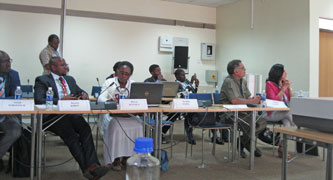 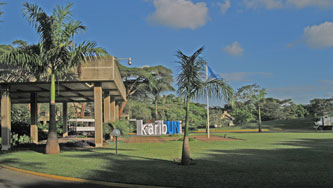 FBO participants in the consultation; UN Office in Nairobi

Summary of reflections by Faith-Based Organizations

There was then an open consultation with FBOs on the UN Environment Strategy, looking for concrete suggestions on leadership, investment, and science, knowledge and communications, summarized as follows.

The groups called for a forum or platform to exchange experience, and to post resources to, and UN Environment said it will open a page on its web site for this. There needs to be a network of networks to assemble existing resources and best practices. It could also include reports on faith-environment events; annual events and a calendar of future events could be listed. For materials in other languages, it would be helpful to have a title or summary in English. Many things are happening in FBOs, but they are not getting out, so there is a need to let the world know. It should become a community of practice to keep sharing.

FBOs are well placed to explore the root causes of environmental problems, and to express the values that speak to the heart. The FBOs could help to move to transformational impacts, with a big message to impact from the global level. They could help to find win-win solutions. They need to discuss what they can do together to have lasting transformational impact, exploring core issues like human purpose. What makes humans human, and not just machines? They should inspire soul-searching; Who am I? Faith communities have another time-line, a long-term perspective, such as the First Nations in North America considering 7 generations. This will be an important contribution to UN Environment.

It is important to include youth in faith dialogues, and to build on their use of technologies. This should include activities on the ground for practical applications. Everything today is expressed and valued in economic terms, and this is driving the world in unsustainable directions. Faith-based groups should advocate for alternatives.

Pollution and food waste were proposed as specific areas of focus for global impact. Pollution is the theme of UNEA 3, so FBOs could support implementation of its outcomes. The theme of the next UNEA in 2019 has not yet been decided, but could become an area of focus. The UNEA should have resolutions including the ethical dimension.

There was agreement that the initial focus could be on three priority environmental issues: pollution, water, and waste reduction and management. Water has an important symbolism in many religions that could be built on. These could be issues around which to build faith-based messages. What in scriptures would reinforce the messages of UNEA? FBOs could reflect on their work from a pollution perspective, and rephrase the issues in their own language, making them relevant to work at the local level. Sustainable consumption and production could be a more cross-cutting alternative, beyond just resource efficiency. It already is a UN Environment global programme. FBOs could contribute to the 10-year Framework of Programmes on SCP, and some already do.

On the goal to Strengthen Partnerships with Faith-Based Organizations’ Leadership for Policy Impact, it was noted that the Pope’s encyclical Laudato Si’ came from the top. A global movement needs direction from the top so that the faithful will follow it. It would be good to reach the highest levels of leadership. An alternative view was to go from the local to the global, starting with letting local communities determine their own priorities, and building from there. Most of the strategy is addressed towards reducing poverty and this is essential, but FBOs also have important messages for the rich who are over-consuming and producing most environmental impacts. There is a rising middle class even in developing countries being drawn into the consumer society that needs to be reached.

The present draft for the goal to green Faith-Based organization’s assets and transform financing the SDGs appeared too focused on finance, and should include a wider greening of FBO’s consumption, assets, buildings and lands.

For the goal on Science-Faith-Based Evidence, there was a feeling that the concept of science in this goal should be refined. Science should include traditional knowledge, which is often less organized. We need more that just knowledge and science. A holistic view is needed to transform people, and to help them reconnect with nature. An alternative would be to use the 2030 Agenda and its SDGs - and look for ways they embody faith beliefs. It is important to avoid the conflicts of science and religion, and to recognize their complementarity.

FBOs were asked what they could offer to UN Environment, and to make concrete commitments, for example the use of their networks to share messages more widely, the availability of knowledge resources, and training of trainers to reach the grassroots of communities. One suggestion for the future would be for the UN to consider creating a Forum of Faith-Based Organizations comparable to the Forum of Indigenous Peoples, to formalize the dialogue between governments and FBOs in the UN framework.