Global Governance in an Age of Transition: The current and future role of the United Nations 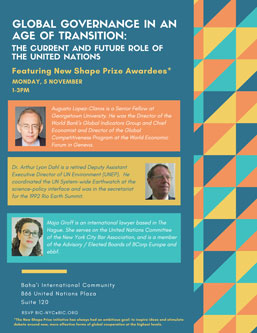 On 5 November 2018, the Bahá’í International Community United Nations Office in New York organized an event on “Global Governance in an Age of Transition: The current and future role of the United Nations” featuring New Shape Prize awardees Augusto Lopez Claros, Maja Groff and Arthur Dahl, the latter two both members of the International Environment Forum.

The event was opened by H.E. Ms. Irina Schoulgin Nyoni, Ambassador and Deputy Permanent Representative of Sweden at the United Nations, and moderated by Ms. Bani Dugal, Principal Representative of the Bahá’í International Community to the UN. Augusto Lopez-Claros provided an historical perspective on global governance and UN reform, and highlighted some elements of their prize-winning proposal, including reform of the General Assembly to pass legislation binding on governments, creation of a second chamber representative of the peoples of the world and civil society, establishment of an International Security Force, and giving the UN an independent funding mechanism. Maja Groff, speaking from The Hague, described the progress made over more than a century in international treaty law, continuing up to the present with the International Criminal Court, international tribunals, and the treaty banning anti-personnel mines.

Arthur Dahl discussed new global risks that have arisen since the UN was founded, including climate change; global pollution by plastics, pesticides and other products created by industry; resource depletion threatening the planetary capacity to produce food, provide water, and supply other natural resources; and inequality growing as wealth escapes from national control and corruption spreads. To respond, the UN needs a capacity for binding legislation and enforcement in these areas, scientific advisory processes to set planetary boundaries to be respected, and negotiating mechanisms to share equitably the efforts needed to stay within those boundaries. Technology assessment is also needed for emerging risks associated with geoengineering, artificial intelligence, and the use of the Internet for social manipulation, among others.

In exploring practical ways forward to implement these proposals, it must be acknowledged that national sovereignty is already eroding with globalisation, and the autonomy of states today is protected best by global cooperation on these issues beyond national control. It will be important to build trust that new global institutions will act in the common interest. The example in Europe which started by ceding national sovereignty in a limited area with obvious joint benefits, coal and steel for reconstruction after the war, and once that was successful gradually expanded the scope of regional institution, could be a model to follow, perhaps starting with more binding commitments to address climate change. A number of steps forward towards reform do not require charter revision and could start immediately. If charter reform proves impossible because of the veto of permanent members, then willing governments could call a charter replacement conference, get the new organisation started with a more reliable funding mechanism, and then leave the old UN behind, integrating all that is good in the UN into the new organisation.

The global governance proposals are now being expanded into a book. They include scenarios of possible ways forward, from governments agreeing voluntarily to these changes, through step-wise progress resulting from various crises, to action by the survivors after the third world war. A world conference to discuss UN reform could be held in 2020 for the 75th anniversary of the UN, coinciding also with the extension of commitments under the Paris Agreement on Climate Change.

After the presentations, comments were provided by H.E. Mr. Christian Wenaweser, Ambassador Extraordinary and Plenipotentiary, Permanent Representative of Liechtenstein to the UN, who expressed concern that international law was under assault from those who do not believe in the UN and wish to return to absolute national sovereignty, and wondered how to address this. John Wilmoth, Director, UN Population Division of the Department of Economic and Social Affairs, speaking on behalf of Elliot Harris, UN Assistant Secretary-General for Economic Development and Chief Economist, highlighted the need for a rules-based multilateral system to correct the failure to share equitably the fruits of globalization which had let to the loss of confidence in international organizations. The Sustainable Development Goals had opened a new era in global governance in which no one should be left behind. The event closed with questions from the audience and responses from the project presenters.

For more information on the proposals, see the page on the Global Governance working group.