A new study by Bastin et al. from ETH-Zurich and FAO and published in Science on 5 July 2019 calculates the global tree restoration potential to absorb and store carbon from the atmosphere. They used direct measurements of forest cover to generate a model with spatially explicit maps to show how much additional tree cover could exist outside of existing forests and agricultural and urban land. Such ecosystem restoration on degraded forest lands could support an additional 0.9 billion hectares of continuous forest. This would represent a greater than 25% increase in forested area, including more than 500 billion trees and more than 200 gigatonnes (billion tons) of additional carbon at maturity. Such a change has the potential to cut the atmospheric carbon pool by about 25%. Such efforts to protect and restore native ecosystems would help to counter both climate change and biodiversity loss. 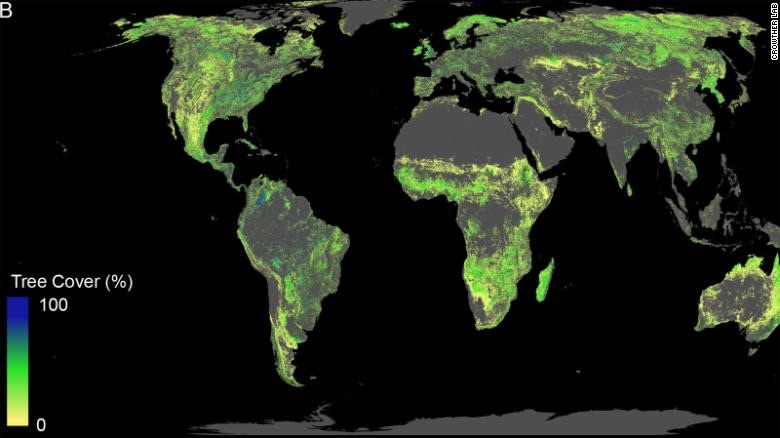 A map of the potential for tree cover, excluding desert, agricultural and urban areas.

Human activity has left 300 gigatons of extra carbon in the atmosphere, and is adding about 10 gigatons per year that will keep warming the planet even if we halt further emissions. There are no proven technologies to remove this carbon from the atmosphere at the necessary scale, but trees do this naturally and store carbon both above and below ground. Many areas were stripped of their tree cover by logging, or were cleared for agriculture but later abandoned. Areas that are currently used as urban or agricultural land, or that would naturally be grasslands or wetlands, are not included because these ecosystems themselves store carbon and support biodiversity.

Restoring forests on all appropriate land not required for other uses has been estimated in the study to reduce up to two thirds of the excess atmospheric carbon when they reach maturity. At 30 cents a tree, this would cost about $300 billion, much less than alternative approaches. The world's forests would increase by about a third, giving the planet more than a trillion extra trees and 900 million hectares of additional tree canopy, an area about the size of the United States.

Most of the land suitable for restoring forests is in six countries: Russia (151 million hectares), USA (103 million hectares), Canada (78 million), Australia (58 million), Brazil (50 million), and China (40 million). But climate change could reduce the amount of land suitable for supporting new forests by a fifth by 2050. While a warmer climate could increase tree cover in northern areas, such as Siberia, it could shrink denser forests in tropical regions. The models of future tree cover have high uncertainty, and do not consider potential loss of forest for pasture or cattle raising, or tropical deforestation by people and wildfires. Deforestation is currently removing about 15 billion trees each year. Nevertheless, the study shows that tree planting and forest restoration, preferably with diverse native species, are obvious actions everyone can take to combat climate change, even if it will take decades to have a real impact.