The International Climate Change Conference in Copenhagen, Denmark, in December 2009 became a major event in the international calendar, debating the global response to the challenges of climate change. While it was only one step in an ongoing process and did not live up to many of the hopes of those who called for dramatic action to reduce the threat of damaging climate change, it did make some significant advances and laid a foundation for further progress. It also highlighted the weaknesses in the present procedures for international decision-making, where the national considerations of sovereign states still take priority over the common interest of all humanity. 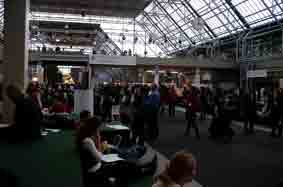 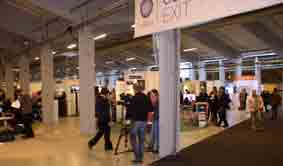 The issues were seen as so important to the planet's future that the event grew beyond a manageable size. Around the complex negotiations among official governmental delegations, there were exhibits by many governments and organizations, side events to discuss topical issues, press briefings, and intense networking within the conference complex. While the conference centre capacity was 15,000 people, the UN had to close registration when it reached 34,000, including 15,000 representatives of non-governmental organizations (NGOs). These included a delegation of 21 from the Baha'i International Community (BIC), co-led by Tahirih Naylor of BIC and Peter Adriance of the US Baha'i Community (and IEF board member), and led the second week by Duncan Hanks of Canada (another IEF board member). At least 14 International Environment Forum (IEF) members attended the conference in one delegation or another, and we organized a few informal meetings and an IEF Governing Board meeting during the conference. Thousands of other people came to Copenhagen to participate in side events and parallel activities for non-governmental organizations, including a Climate Expo and an NGO Klimaforum with its own two-week schedule of panels and other events. 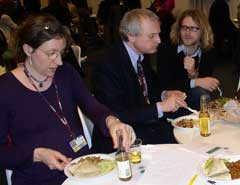 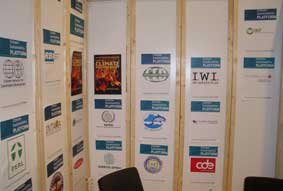 One encouraging sign was the increasing acknowledgment that climate change was a moral issue and that ethical principles would be important to finding a way forward. There were frequent references to equity and climate justice in many events and documents. This was an area where BIC and IEF members were particularly active. 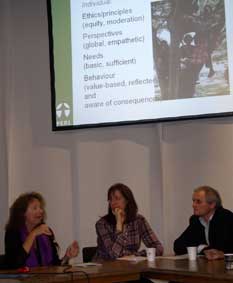 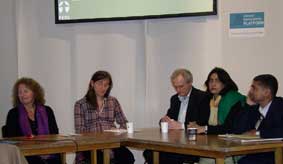 Four members of the IEF, Victoria Thoresen, Sylvia Karlsson-Vinkhuyzen, Onno Vinkhuyzen and Arthur Dahl, participated in the Climate Sustainability Platform at the pre-conference Climate Expo on 3-6 December 2009. This was organized by Uchita de Zoysa of Sri Lanka with about 40 people of diverse backgrounds from all parts of the world whom he had recruited with donor support. There were four days of plenaries and workshop sessions, leading to the drafting of a final message and press release to be delivered to the Klimaforum in an event on Tuesday afternoon 8 December. Arthur Dahl spoke in a panel on "Mitigation and Adaptation Challenges in a 2050 World", and gave a plenary talk on the last day on Climate Ethics. He was also part of a three-person drafting group that prepared the final message. The IEF was mentioned with its logo on a poster among the platform organizations and in the Climate Sustainability Platform's exhibit at the NGO Klimaforum the following week. There was a daily page on the platform in the Stakeholder Forum "Outreach" distributed throughout the conference, with the first issue on Monday 7 December quoting specifically from Sylvia's and Arthur's presentations. Victoria Thoresen, Sylvia Karlsson-Vinkhuyzen, Onno Vinkhuyzen

At the request of the BIC, Arthur Dahl joined Professor Don Brown's Collaborative Program on the Ethical Dimensions of Climate Change (http://rockethics.psu.edu/climate/) activities in Copenhagen (along with Peter Adriance and Tahirih Naylor), including an all-day seminar on the ethical dimensions of the Copenhagen Agenda on Thursday 10 December, and a half-hour press briefing and webcast in the conference centre on Friday 11 December, presided over by Peter Adriance, where the final statement was presented (see http://climateethics.org/?p=320 and UNFCCC Webcast at http://www3.cop15.meta-fusion.com/kongresse/cop15/templ/play.php?id_kongressmain=1&theme=unfccc&id_kongresssession=2433). 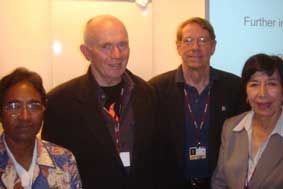 The Baha'i International Community organized an event on the "Moral and Ethical Dimensions of Climate Change" at the Klimaforum on Saturday afternoon 12 December, with Philo Morris (Medical Mission Sisters), Don Brown (Rock Ethics Institute at Penn State University) and Arthur Dahl (IEF) (see Dahl powerpoint presentation on Ethical Dimensions of Climate Change 3.1mb) as speakers and Irma Allen (Swaziland) as Chairperson (see photo right). Nearly 50 people attended, and there was a good exchange. There were also many informal meetings to brief officials and diplomats on the moral and ethical challenges of climate change, the opportunity it presents to move towards improved forms of international governance, the importance of gender justice, and the roles of both science and religion in addressing climate change. The BIC representatives called on member states to show moral courage and leadership and demonstrate a commitment to the prosperity of all, particularly the most vulnerable populations, as they strived to reach a fair, ambitious and binding agreement. Arthur Dahl has prepared a paper on Climate Ethics and the Copenhagen Summit summarizing some of the ideas presented at the different events and reflecting on the outcomes of the conference.

The European Baha'i Business Forum issued a statement during the conference on "An ethical perspective on the environment" (http://ebbf.org/ebbf_climate_change.html) calling on business to lead in finding solutions to climate change issues.

The Baha'i Community of Denmark opened its National Centre in Copenhagen every evening for events, including devotional gatherings and talks by IEF members Victoria Thoresen, Peter Adriance, Minu Hemmati, Irma Allen and Arthur Dahl. We also participated in other outside events such as the World Economic Forum young global leaders evening, and an Education Caucus Event on the UN Decade of Education for Sustainable Development. 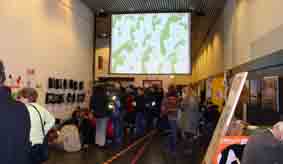 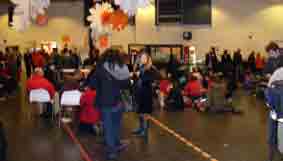